The Question of War and Peace 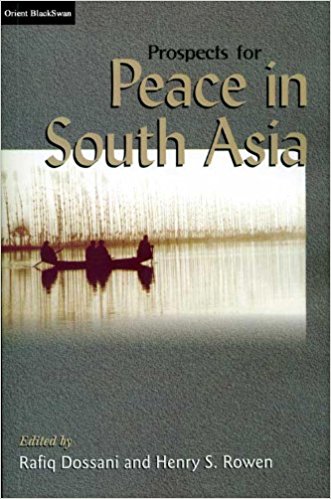 The title of the book under review is utterly misleading. It certainly misled me when I agreed to do the review. First of all, this is not a book about South Asia if we go by the widely accepted definition of the subcontinent. South Asia is supposed to have at least seven states: India, Pakistan, Bangladesh, Sri Lanka, Nepal, Bhutan and Maldives. The slight disagreement is about the justification of including two other states – Afghanistan and Myanmar. As far as this book is concerned, South Asia is only India and Pakistan. None of the chapters deals directly with any other countries. In nearly three and a half hundred pages of the main text, Sri Lanka, Bangladesh and Nepal come up only in the last three pages, that too as an ‘Appendix’. At one level, these exclusions may have something to do with the rather restricted and negative manner in which the term peace is employed in the book, essentially as absence of war between states. Internal conflicts are taken into account only to the extent that they affect the bahaviour of states vis-à-vis one another on questions of war and peace. That seems to be the reason why internal conflicts in Sri Lanka or Nepal are not discussed in any detail even though neither country has seen much peace in recent years.

However, the real reason for these glaring anomalies becomes clear the moment we begin to read the Introduction. This is not actually a book about South Asia as such, but rather about those parts of South Asia which cause the Americans major worries and concern, at the moment. The moment happens to the period between 1998, when India and Pakistan conducted nuclear tests, and 2002 when the two states engaged in a ten-month long eyeball to eyeball border deployment until India withdrew its forces. Kargil had happened in between, in 1999. Many among the American policy makers were convinced by the events of this period that India and Pakistan could go to a nuclear war. Would they in fact do so? What were the domestic and subcontinental factors which turned such a possibility into high probability? What could the Americans do to lower the rate of probability? What should they in fact do?

These could and must have been genuine concerns for the only super- power left in the world. Inputs from the American academia and private research institutions would naturally be welcome. That is presumably when the book was conceived, or perhaps the conference on which the volume is based. Twelve of the fifteen contributors are American. They make their analyses and they make their suggestions. As a typical South Asian academic concerned about peace in his region of the world, I would not be disinterested in knowing what the range of American academic perceptions on the question was. It would not bring down the value of volume for me if it were given a more honest title such as “Risk of Indo-Pak Nuclear Conflict: American Perceptions”. Who is responsible for the misleading title: the editors, the original American publishers or the Indian publishers? Does it make a lot of sense to sell a few copies more this way?

Which brings me to the next point, which has implications beyond this volume. This is about bringing out Indian editions and reprints of books published in the West. As far as I can make out, this was meant to be a volume about what was seen as an essentially American concern, written by Americans for American readers. There may be a specialist audience, necessarily small in number, in other countries as well which wants to know what Americans think on various issues. Such niche audience often has the means to buy the original American edition. So what can an average South Asian reader expect to get from a reprint? Do American publishers bring out special American reprints of South Asian scholarship on America? Is this not another case of American/western hegemony in our academia? Why else should we routinely tend to lean on western scholarship rather on our own even when the subject happens to be our own countries? Those among us who are also teachers must realize the role we are thus playing in passing on the colonial mentality to successive generations.

My final general point about the book has to do not with the editors or the publishers but with the contributors. Having understood from the Introduction what the real concerns of the book are, I began to experience a rising level of annoyance with the way most contributors have approached their assignments. The objective of the book, stated on the very first page of the Introduction, is to analyse three key factors – influence of religion and religious extremism, role of Pakistan army as a political force, and the possession of nuclear weapons by India and Pakistan – as they influence the threat of a nuclear conflict. Many contributors however decide to take a long detour of the ‘historical background’, spending in the process much of their own energy and the reader’s time. I do not know whether this happens because many contributors happen to be historians or because they happen to be simply too entrenched in their ‘academic’ moorings, for the tendency to begin with the beginning is common among non-historian academics as well. At any rate, in most cases the detour does not seem to make the analysis of the ‘current scenario’—to which much greater space should have been devoted—any less tentative and speculative. That is because only a few contributors are able to discern long term patterns in history which are enduring enough to persist in the present and influence the future. In most cases, one gets lost in the chronological description of the vicissitude of circumstances. Given this, I wonder how much wiser the American policy makers would be in their decision-making after reading this book. These details may be informative for the fresh undergraduate students in the American university departments of South Asian Studies, but they are hardly news to any South Asian reader of the book.

To disaggregate the book into twelve essays, each discreet in its own orientation and purpose. Some are both insightful and persuasive. Charles Kennedy points out very interesting parallels in the ways in which successive military regimes in Pakistan have been able to neutralize civilian opposition, gain legitimacy, and establish themselves, so much so that purely civilian democracy seems to have no future in Pakistan. Peter R. Lavoy’s essay, somewhat misleadingly called ‘Pakistan’s Nuclear Doctrine’, is actually about something larger and more pervasive. It maps the various discourses – military, political, social and psychological – which are woven around nuclear weapons in that country. Rifaat Hussain, a Pakistani scholar, has written an essay on his country’s relations with Azad Kashmir with such scholarly neutrality and candour that it should be exemplary for Indian and Pakistani scholars writing on Kashmir. Among the essays on India, Ainslie T. Embree’s ‘Who Speaks for India?’ is full of deep insights about the nature of relationship between nationalism, state and civil society which produces ambivalences at all three levels. Shorn of the jargon Rajesh M. Basrur resorts to like all strategic theorists, I found his analysis of the border deployment of the Indian armed forces very cogently argued and a timely caution against its repetition in future.