The Power of Song 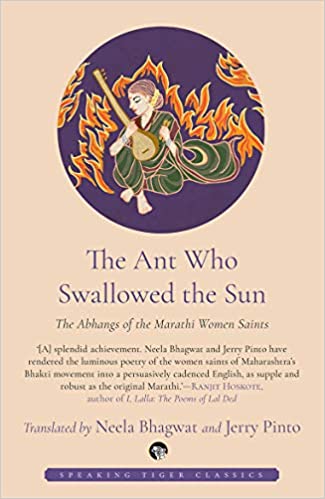 The Power of Song
Rohini Mokashi-Punekar
THE ANT WHO SWALLOWED THE SUN: THE ABHANGS OF THE MARATHI WOMEN SAINTS by Neela Bhagwat and Jerry Pinto Speaking Tiger Classics, 2020, 181 pp., 299.00
September 2020, volume 44, No 9

Self-identity and self-expression have never been very smooth for women, described by one of the translators of this volume of poems under review as ‘adi-dalit, the original broken, oppressed and silenced’ caste. When social, economic and linguistic norms are grounded in patriarchal structure, the attempts by women to find a voice for themselves are necessarily fraught with conflict and tensions. The fullest evidence of this may be seen in the figure of Akka Mahadevi within the Virasaiva movement, whose rebellion expressed itself in her poetry and in her physical nakedness which she offered as a challenge to caste-bound patriarchy. Mirabai too destabilized both political and social constructs as seen in the stories surrounding her life and in her poems.

The Varkari saint-poets, whether men or women, seem to function within a more mellow space, marked by their general acceptance of domesticity and quotidian living, even as many of them perceive themselves and are perceived by the dominant social order as outcastes. As householder saints, a majority of them belong to the lower order of working castes: therefore their lives are dominated by the labour which they necessarily have to perform to keep themselves alive. Renunciation is not an option here. Though their bhakti appears to be channelled in and expressed through the daily grind of their work-a-day lives, yet this power of love overflows and breaches social boundaries. Very crucial to the Varkari sampraday is the worship of the saints associated with this tradition. Many abhangs, the devotional poems based on the form of the ovi, speak of the Varkaris falling at one another’s feet as a mark of their grateful submission. Frequently Vithal is addressed as mother: Vithobamauli is the endearing term of address. Saints too transform into mothers. As Pinto says about the Marathi women saints in his Preface: