The Man who Stood Against the Tide of History 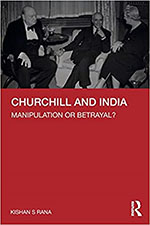 Historian Ramachandra Guha has spoken of what he calls the ‘Boyle’s Laws’ of biography writing; named for their author, Goethe’s biographer Nicholas Boyle, they argue for a biography to be a logical progression to its conclusion, rather than the elaboration of a premise stated in advance; the drawing upon characters other than the principal to illuminate the narrative and extensive reference to sources other than those directly attributable to that subject. Winston Churchill’s views were congruent with Boyle’s on at least the first law; in the introduction to his maiden work, The Story of the Malakand Field Force, he writes that ‘on general grounds, I deprecate prefaces. I have always thought that if an author cannot make friends with his reader, and explain his objects, in two or three hundred pages, he is not likely to do so in fifty lines.’

Kishan Rana clearly concurs. While the title of his book Churchill and India: Manipulation or Betrayal? is puzzling (in that the alternatives seem scarcely in contradiction to each other) and preemptively conclusive, its narrative is not, unfolding point by seamless point towards a final set of hypotheses.