How Ideas Shape Policies and Laws 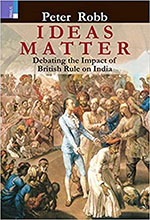 Peter Robb’s Ideas Matter: Debating the Impact of British Rule on India attempts in nine chapters to present a scenario on the debates regarding the impact of British rule on Indian society, economy, culture and politics. The long-debated introduction titled ‘Changing Governance, Agriculture and Identities’, highlights various colonial themes. The author starts with an analysis of the relationship between India and Britain and argues that ‘both countries would be different today’ without British rule in India. The author then surveys the British legacy and the nature of economic change which made the British dominant in the late eighteenth and nineteenth centuries. He also cites an example of ‘great divergence’ by Kenneth Pomeranz. The introduction also talks about the starting point of revenue administration in India, with some examples from the mansabdari and jagirdari systems of the Mughal empire.

Furthermore, Robb defines variant meanings of agriculture and argues that ‘agriculture is undertaken for different purposes: for example, for food, profit or status’. He takes the arguments of Morris D Morris, Tapan Raychaudhuri and Tirthankar Roy on the impact of British rule and puts forward his views. He says that ‘Raychaudhuri agreed that there was patchy commercial development and increase in agricultural output in the nineteenth century, but stressed the lack of regional and sectoral balance, and the unfair distribution of profits.