Locked in His Own Legend 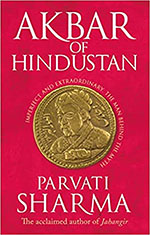 Locked in His Own Legend
Meena Bhargava
AKBAR OF HINDUSTAN: IMPERFECT AND EXTRAORDINARY—THE MAN BEHIND THE MYTH by Parvati Sharma Juggernaut Books, 2022, 386 pp., 799.00
January 2023, volume 47, No 1

The book is a biographical account with a difference, of an emperor, contested currently in national discourse, in a simple story-telling style to make the narrative thrilling and delightful.  Written with passion and curious interest combined with theatrical melodrama and humour, it captures the multi-faceted personality of Akbar, his different moods, temperament, sentiments, emotions, compassion and open-mindedness, yet the focus primarily remains to be on the power-driven, ambitious, warrior, conqueror, imperialist, who is never free of court animosities, politics, resentments, turmoil and turbulence enmeshed in kinship and patronage. The latter is significantly knitted into the text and cannot be missed especially with the ‘Cast of Characters’ provided at the beginning of the book, with details of Akbar’s family, foster family, family friends, ‘frenemies’, his courtiers, advisers and several royal families that he encountered or acquired through birth or marriage. The emperor’s adversaries in the present ambience—whether historians, politicians, journalists or any other—may rally to countermand him but the revocation of the sagacity of his contemporaries may not only be difficult but impossible. The common man of Akbar’s period saw him as an exceptional and blessed emperor and ‘an embodiment of miraculous power’ as Harbans Mukhia defines him. Parvati Sharma appropriately introduces Akbar as Niru’un (Born of Light) and traces his descent to Alanqoa, the Mongol queen, impregnated by divine light. Amongst her children, one of whom an ancestor of Chingiz Khan’s nine generations before, was also the progenitor of the Mughals. Her day of conception, Abu’l Fazl, Akbar’s chronicler, characterizes as aghaz-i zuhur or ‘the beginning of the manifestation of his Majesty (Akbar)’.