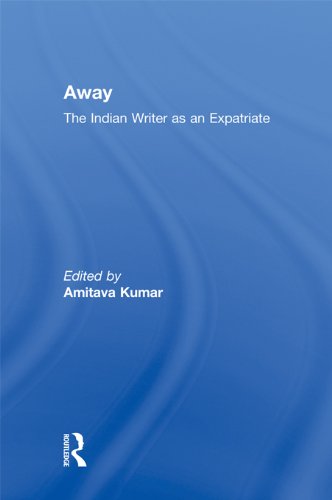 ‘How does the writer of Indian origin living abroad negotiate longing and belonging ?’ asks the editor in his highly readable and insightful Introduction to the anthology, and for a while I was persuaded that the thirty-three pieces that comprise the volume are meant to provide a range of answers to that question. And indeed they do, unless one begins to look closely at the contents page. Then the doubts begin . When did R.K. Narayan become an expatriate? What are Subhas Chandra Bose’s letter of resignation to the Indian Civil Service or Nissim Ezekiel’s ‘Goodbye Party for Miss Pushpa’ doing in an anthology which is meant to focus on the diasporic experience? How do the letters written by Jawaharlal Nehru, Sarojini Naidu and Rabindranath Tagore, all of whom were unquestionably rooted in India, contribute to the longing-and-belonging syndrome? Elsewhere in the Introduction Amitava Kumar proclaims, ‘In some measure, this anthology of essays pays homage to the ordi­nary experience of migration which can be at once modest and magnificent.’ Evidently, the intention and the contents do not always match.

If the editor had merely said that the chosen pieces focus on the relationships of Indians with other countries, it would not have sounded very trendy, but it would have been the truth. These relationships do not always depend on physical migration, as we see in the extract from Nirad C. Chaudhuri’s Autobiogra­phy of an Unknown India. Printed texts, imagination and misconceptions also play their part.

But some of the pieces are individually so riverting that after a while it is possible to overlook the discrepancies in selection and enjoy the reading experience. All the expected transcultural names are here—Naipaul, Rushdie, Haneif Kureishi, Faoukh Dhondy, Ved Mehta, Bharati Mukherjee, Rohinton Mistry, Meera Syal and others. Writers normally not considered as expatriate like Arnitav Ghosh and Amit Chaudhuri also figure here, but my personal favourite is a piece from an earlier era I had never read before.  Sunity Devee, the Maharani of Cooch Behar describes with a refreshing candour her visit to England with her husband in 1887 to partici­pate in Queen Victorias golden jubilee celebrations. After the queen gave a private audience to this trembling young woman, she attended a reception dressed in a ‘white and gold brocade gown and a crepe de Chine sari’ (I am intrigued at a gown and a sari being worn simultaneously) carefully chosen by her husband. She describes disarmingly the social gaffe she committed by refusing to be kissed by the queen. Her observations about other guests are piquant. At the party she was ‘shocked at the low-cut gowns worn by the ladies present. The cold was most trying to the complexions and shoulders, the prevailing tints of which were either brick-red or a chilly reddish-blue.’ How different are her clear-eyed clinical findings from the reaction of another Indian visiting England a century before Sunity Devee, whose male gaze was transfixed by the “[British ] ladies … lovely as houries…Speechless with admiration, I stood like a statue and [was ] overwhelmed by the glory of Allah’s creative power”. These lines from The Wonders of Vilayet by Mirza Sheikh I’tesamuddin (1874 ) are not in this volume, I quote from a recent review of the book by Harish Trivedi, to highlight how gender (and possibly class) can make a difference in an Indian’s response to the native women of the British Isles.

The oldest piece of writing in this volume is by Dean Mohamed (born in Patna in 1759) who made a career in London by setting up a shampooing saloon (his account was made available to the world by Michael Fisher in 1996). The most recent is probably the editor’s own piece ‘Flight’ (2002) which dwells on a disturbing news item in the Guardian about one Mohammed Ayaz, ‘plummeting from the sky like a stone’ a little before the plane landed in Heathrow. His is not the only case of a stowaway dropping dead from the under-car­riage of an aircraft. That the desperation to go abroad can take this dangerous form is a fitting finale to a volume that contains many variations on the desire for departure. Abraham Verghese’s account about Indian doctors lying, cheating and attempting to bribe in order to migrate is a piece specially moving in its honesty and pathos.

This essay by Abraham Verghese, ‘The Cowpath to America’ originally published in two issues of the New Yorker, is unique in being the only recent account of the migrant’s experience in this volume by a person who does not belong exclusively to the literary world. Verghese is a doctor first, and then a writer, and he brings in his experiences from a professional field outside the academy. One of the best migrant novels I have ever read was by an engineer (ex -IIT) living in Manhattan: Ei Dweep, Ei Nirbasan (This Island, This Exile). It was written in Bangla some twenty years ago before the wave of English translations swept our country. The author Manoj Bhowmik died untimely and the novel has been virtually forgotten. There too, as in Verghese’s rail found a different perspective that ‘literary readers are seldom exposed to. It is perhaps inevitable that those who agonize the most about longing and belonging should be novelists or literary academics–because they not only have the state-of-the-art awareness of  migrancy, hybridity and biculturalism, but also the most sensitive language of articulation. That is why the narrative of expatriation will continue to have a sameness, and (with exception of Arnitav Ghosh) the other country will always be in the West. That is why we do not find in this volume any first person account of the indentured coolies who went to work in the sugarcane fields of Trinidad, or the Tamilians who were taken to the rubber plantations of Malayasia or those who found jobs as railway workers in East Africa. They simply did not have the language to write about their experiences.

Amitava Kumar in not unaware of the limitation of his material. In the Introduction he writes: ‘I wanted to write about the landless labourers in Bihar, the men from my ancestral village who migrated each summer to the rock quarries and wheat fields of Punjab. I had decided they were the real migrants, not I. Elsewhere in the same Introduction he says,  ‘… it is not the person in Wembley or New Jersey who is exile from home, but the dalit tribal displaced by a large dam that has drowned whole village.’ Yet he goes on to prepare an anthology where most of the expatriates have left home voluntarily and having decisively exercised their option can thereafter write eloquently and nostalgically about longing and belonging.

A review however must concentrate on is on the page rather than what might have been. There are three poems in the anthology by Ezekiel, by Ramanujan and by Agha Shahid Ali; two short stories by Rohinton Mistry and Salman Rushdie; several extracts from fiction and autobiographies (it is difficult to decide whether Mulk Raj Anand’s description of sherry party at Harold Monro’s poetry bookshop is fiction or autobiography); one chapter in translation from Quaratuiain Haider’s Aag ka Dariya which for some mysterious reason is presented as originally written in English; letters, travelogues, essays and several pieces that do not fit neatly into these generic slots. All of them are readable, many are vivid and amusing, some devastating in their comic self-flagellation. Once I stopped worrying about the rationale of the book or the logic of selection I found the volume highly enjoyable.

Meenakshi Mukherji is Honorary Professor in the Department of English at the University of Hyderabad.