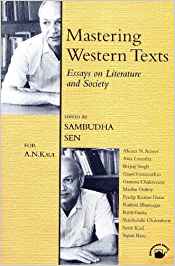 No one who was taught by Professor A.N. Kaul in the 1970s is likely to have forgotten the experience. He would stride into the seedy English Literature classroom in the Arts Faculty Building at the University of Delhi  —others might slouch or stroll or canter; Professor Kaul always strode— followed by a billowing cloud of cigarette smoke, and he would launch into a controlled but passionate performance of what can only be called The Theatre of Thinking Aloud. Day after day students would be served up an exceptionally rich diet of some Very Solemn Utterances about some Very Thick Books. Professor Kaul would stride to the desk, sit in a nearby chair, speak, gesticulate (cigarette in hand), pause, speak, think, pause, rephrase, and finally—  in a Jamesian flourish refined by polished qualifiers  —assemble a Very Solemn Utterance. One could almost hear him thinking; it may have been theatre, but there was nothing inauthentic about it. Drawing upon a puckish wit, a composure that was regally assured, and a scholarly authority that was both enviable and terrifying, he would in turn charm and hector his students into original, if reluctant, thought.