The Literary Presence as ‘Culturing’ Realism 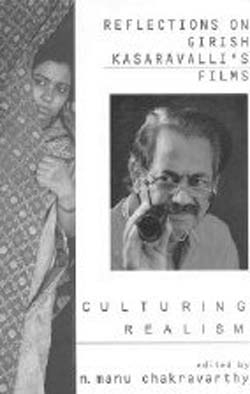 It is apt that this review is written at a time when Girish Kasaravalli’s latest film Gulabi Talkies has won the Osian’s Best Indian Film Award. It is ironical that someone who is an important figure within the stream of parallel cinema has not found a place in the intellectual debates around parallel cinema. It is perhaps this lack that is the guiding motivation to N. Manu Chakravarthy’s edited volume of articles on Kasaravalli’s films Culturing Realism brought out by Suchitra Film Society and Nudi Pustaka.

The book is a collection of academic essays, articles and interviews that have been already published in books, magazines and newspapers. The collection is heterogeneous, not so much because of the varied genres of writing as much as the levels of insight that they offer into Kasaravalli’s films. On the one hand, we have articles by Pradip Biswas, H.N.Narahari Rao and Madhu Eravankara that are largely plot analyses.

If Eravankara provides a reading of Kasaravalli’s Dweepa as a critique of development, Biswas and Rao focus on the feminist thread that runs through the films Dweepa, Thayi Saheba and Hasina. If Rao at least identifies in these films questions of freedom, agency and religious fundamentalism from the perspective of the woman protagonist, Biswas mistakenly draws on feminist theorist Toril Moi to make an argument about and extol Kasaravalli’s women characters as embodying the Mythic Mother figure—a tower of ‘human warmth, feminist strength and eternal optimism’ (p. 95).