Futures of the Past: Tamil Cinema and History 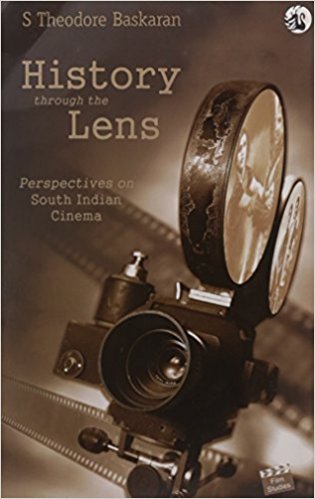 Futures of the Past: Tamil Cinema and History
Bindu Menon
HISTORY THROUGH THE LENS: PERSPECTIVES ON SOUTH INDIAN CINEMA by Theodore Baskaran Orient BlackSwan, 2009, 126 pp., price not stated
February 2009, volume 33, No XXXIII

There has been a new interest in the histories of regional cinema industries in academic institutions which are manifested in ongoing research and recent conferences. Theodore Bhaskaran’s new book titled History through the lens: perspectives on South Indian Cinema takes a comprehensive look into one of the major film industries. Theodore Bhaskaran’s name commands great respect among scholars and students in the field of India Film studies. One of the first scholars to write on the ‘beginnings’ of Tamil cinema in the now established area of early cinema studies, Bhaskaran has a rich oeuvre of books and numerous essays in English and Tamil including the titles ‘The Message Bearers’ and ‘The Serpent’s Eye’, which are works of immeasurable value. The book under review is a collection of his essays on Tamil Cinema- its form, politics and industry.

It is an engaging rumination on topics varying from film history to transitions from theatre to film and literary adaptations to film music and Trade unionism in Tamil Film Industry thus covering the life of Tamil cinema from 1920s to 2004 through these thematically organized essays. In seven clearly defined chapters, the book presents a historical and sociological time line for the development of Cinema in Tamil Nadu over a time span of 100 years.

Bhaskaran in the introductory chapter, posits the problem of film history in India- paucity of sources, absence of films themselves, authenticity of sources and the accompanying issues that arise out of the absence of cinema as a classificatory category in the archives. Providing a systematic description of various kinds of sources-government reports, government files, journals, autobiographies, biographies, industry records, trade papers, private collections etc the chapter is an excellent guide to the world of historical research on the Indian cinema.