The Issue of Language 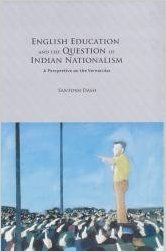 The Issue of Language
S. Srinivasa Rao
ENGLISH EDUCATION AND THE QUESTION OF INDIAN NATIONALISM: A PERSPECTIVE ON THE VERNACULAR by Santosh Dash Aakar Books, 2010, 175 pp., 375
June 2010, volume 34, No 6

The issue of language has always drawn attention in social science debates on such diverse themes as culture, nationalism, nationality, education, and social mobility. It is always seen as a divisive force that has the ability to cut across even more divisive features of any society, more so of the Indian society with its characteristic diversities such as caste, religion, ethnicity, or region, which by themselves are more divisive than language. However, the issue of language was rarely linked, if not completely neglected, to explain the caste hegemony or dominance, on one hand, and subordination and submission, on the other on language in educational contexts. However, two important trends of globalization and localization have drawn scholars of various ideological, theoretical and disciplinary standpoints to the issues of language as well as caste in educational exclusions.

Particularly, in the context of the recent demands of the dalit bahujans for quality English education in order to attain what they call ‘cultural globalization’ of the socially disadvantaged, on the one hand, and the persisting demands of the English educated, non-dalit bahujan, academia asking for policies of multilingualism rooted in the mother tongue (mostly vernacular) based education.

Both these positions are justified: If the dalit bahujans are not English educated, as was the case during the colonial period, they will be left out of the process of globalization that has brought rich dividends for the so-called English educated, middle class, upper and intermediary castes. The division of English and the vernacular is clearly and sharply marked out. On the other hand, the votaries of mother tongue based multilingualism clearly argue that they are giving voice to the voiceless linguistic, vernacular minorities, which are almost at the verge of endangerment or extinction. This position, however, has not cut any ice among the disadvantaged groups who see it as yet another ploy of non-dalit bahujans to exclude dalit bahujans. It is this contestation between the English and the vernacular or the native language that is posited by Santosh Dash in his book in the backdrop of both the history as well as the contemporary.

The book is drawn out of the doctoral research by the author, who begins with many claims, of which three may be worth mentioning. Firstly, the author begins the introduction by stating that the book aims to explore an issue which has so far not drawn much attention in the debates on language, nationalism, vernacularism and education. To be precise, the author claims that the book breaks new ground. This is only partially true. For instance, the author himself negates such a claim by referring to the works of Bhimrao Ambedkar, who wrote and argued in favour of English education for dalit bahujans, against the nationalist position in favour of the vernacular. Another contemporary scholar, Kancha Ilaiah, referred to by the author, has also brought in such connections in more than one of his works. The author refers to only one book by Ilaiah (Why I am not a Hindu), leaving out another (Buffalo Nationalism), which is more relevant in the light of the discussion in the book. What is important to note is the omission of the work of Alok Kumar Mukherjee (The Gift of English: English Education and the Formation of Alternative Hegemonies in India), who examined the issue with a similar disciplinary background as the author himself with much more clarity and depth. Yet another omission in this context is the work of Krishna Kumar (Political Agenda of Education). In the light of such a wide body of literature around the main focus of the book, the claim of ‘breaking new ground’ does not hold good.

Secondly, the author claims that the debates in defence of the vernacular are as much hegemonic as they are in the case of English education in the colonial times. This statement is not elaborated against any specific language debate backdrop. Hence it
is difficult to understand what exactly the author is referring to: whether he is referring to the very issue of lack of access to education for dalit bahujans as a result of their inferior and unequal status in the rigid caste hierarchy or simply raising the issue of access to particular vernacular or classical or English education for the dalit bahujans.
Further, while there is truth in saying that caste minorities were kept out by both the English as well as the vernacular, it may not solely be so. For instance, if colonialists advocated common schools irrespective of caste, class and creed, why then were the dalits and the backward castes denied access to such education or why did the British administration turn a blind eye to such issues of discrimination and exclusions in both vernacular and English education? The author does not come out clearly on this issue. Moreover, he argues that English education was restricted to the elite (caste as well as class) and, at the same time, does not discuss adequately how the same caste-class dominance was perpetuated even in the vernacular ‘common school’. In the entire discussion one wonders what exactly the author means by English education, whether he means English as a school language or as a medium of instruction.
Thirdly, the author claims that he had approached the central issue from an interdisciplinary perspective. However, what is ultimately found is fundamentally and predominantly a language studies perspective, or to be specific, the English language studies perspectives. The author states that he had incorporated an interdisciplinary perspective by drawing upon the arguments from what he calls dalit studies, subaltern studies, women’s studies, etc., which by themselves are not disciplines, but are interdisciplinary or multi-disciplinary approaches to the study of specific excluded and marginalized groups. It must thus be noted that the confusion generated within the text is partly due to the zeal to claim the work as interdisciplinary, despite it being strongly rooted in just the history of language in education or language studies. The integration of perspectives from disciplines such as sociology, history, and politics into the discussion would have made the discussion of the central premise more meaningful by drawing upon literature and theory on politics of hegemony, reproduction, class and caste exclusion, etc. Some of the thinkers the author could have considered in the discussion are Bourdieu, Bernstein, Gramsci, etc.
The book has four chapters excluding introduction and conclusion. The organization of the chapters also leaves much to be desired in terms of clarity. The first two chapters, namely, ‘colonial education and native agency’ (chapter 1) and ‘the making of the national elite’ (chapter 2) do not provide grounding/context to the subsequent two crucial chapters, namely, ‘English and the politics of the vernacular’ (chapter 3) and ‘English in a democratic nation’ (chapter 4). Further, the chapters do not correspond and link with each other in the light of the central premise of the book. Even within each of the chapters, for instance, as in the first and second chapters, there is so much fragmentation that really distracts the reader and makes one feel that the work is hotch-potch. It must, however, be clarified that, by saying this, the reviewer does not mean that the author had resorted to a cut and paste job. Certainly the author does exhibit originality in his writing. What the reviewer means is that the author could have integrated the contents across various chapters or within a particular chapter better than leaving out separate plots as it may happen in fiction. The author leaves the chapterization consciously like that, knowing pretty well that the contents are fragmented. In his own words, ‘the titles to chapters and sections are indicators of the fragmented structure of the book’ (p. 15). What is even more appalling is the author’s assumption that the reader can/may make connections between the fragments and make sense of the work. However, in reality, as the author traverses across such a wide variety of topics and contents, it becomes really difficult to comprehend what is in the mind of the author as this, as mentioned earlier, is not a work of fiction, to make wild imagination and guesses.