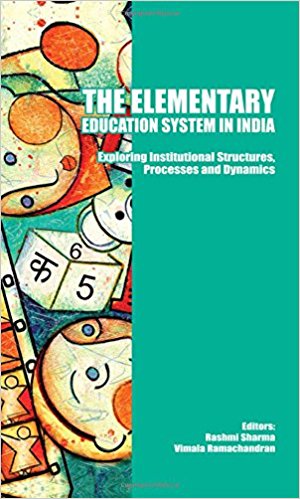 The book under review seeks to address an issue which has ever remained an area of great concern, how to improve the governance structure of the elementary education system in India. Despite expansion albeit mostly in terms of statistics, the poor delivery mechanism of the elementary education system in India has been the most crucial factor behind our failure to ensure good quality education to all. Quality of education is not only a function of inputs including resources but more importantly, of institutional arrangement. The process of fragmentation of the society continues resulting in a growth process which can best be described as exclusive rather than inclusive. Various dimensions of deprivations and discriminations with respect to caste, gender and location have had adverse effects on the system. Even small villages and small habitations suffer more as the larger ones can exercise more clout to ensure better facilities in terms of teachers and infrastructure.

The progress in terms of various indicators such as literacy rates, gender gaps, drop-out rates, enrolment rates has continued to be tardy particularly in some of the low-income states. In general, high-income states and Kerala have been able to put in place better governance structures.

Education being in the nature of service, the quality of education imparted depends much on the teaching-learning process that takes place inside the classroom, and how the important actors, like the teachers and the education administrators at various layers conduct themselves in their respective spheres of operation. This requires an understanding of the context, a very complex process where socio-economic, political and cultural factors interact and impinge on the functioning of the institutions. The book seeks to argue that an attempt to understand the system focusing merely on the stated rules and procedures would only reveal a partial picture as the informal system is not only entwined with the formal system, it creates a new dynamic.

The book covers a vast swathe of issues through eight essays. In the Introduction the editors provide a broad panoramic view of the elementary system of education in India in terms of the oft-quoted indicators to set the stage for the arguments that the book develops. The book is essentially based on an in-depth field study of the institutions, the schools and the various layers in the range of education administration comprising administrative, academic and community based, their internal organizations and their interface with the society in Andhra Pradesh and Rajasthan. As the editors argue, the objective of studying the two states is not to compare and contrast their institutional functioning but to look for commonalities in terms of contexts and trends as these two states would broadly represent similar institutional structures of the south and the north of India. But the reader in the end may remain curious to know how the governance system of the school delivers and how the schools, community participation, rural and the urban bodies and their political affiliations work themselves out in a state like Kerala with exemplary performance in elementary education in India as compared to the other two states.

The fourth chapter, ‘Glimpses from the Villages and Schools’ provides good insights from the field-level study of the classrooms and how the socio-political contexts have a bearing on the delivery of education. The crux of the argument developed in the book finds its clear exposition in the chapter on Internal Dynamics authored by Rashmi Sharma. The objective is to locate the discussion on governance of the institutions with the help of insights gleaned from the works on political theory by Lloyd and Suzanne Rudolph, Sudipta Kaviraj, Pranab Bardhan and many others. The failure to deliver good quality service which is inherent in the very nature of a government institution is also discussed with the help of the principal-agent model. The agents who are government employees would hardly act in the interest of the principals, either the society or officials and higher ups because of their self-interest coupled with the inability of the principal to monitor the agent. The problem is compounded as various officials operate in a well-defined hierarchical set up. It may be noted that in India corruption and indulgence in malpractices continue to thrive because there exists a nexus between the politicians and government officials and the teachers. The chapter discusses how the transfer system of the teachers has been abused by using it as a reward or punishment by the politicians to muster support during their campaigns before election. This chapter makes an important contribution to our understanding of the governance structure of the educational institutions at the level of elementary education by adding a new dimension to the analysis of governance, the complex dynamics and processes involved in the functioning institutional structure.

The interaction between the unstated informal and the stated formal to understand the system dynamics gives a new perspective to unravel the governance problem not only in the education system, but for the study of the entire gamut of institutions in our country. The system is managed by patronage and rent-seeking at various levels of administration and among various entities of the larger administrative set-up. The analysis of how the perceptions of the key actors like that of teachers towards the students from SC/ST and marginalized groups and how the discriminatory attitudes of the administrators towards teachers at the elementary level because of their poor economic background in general and discrimination vis-a-vis the secondary school teachers is illuminating and contributes to an enriched and meaningful analysis of the functioning of the institutions. These problems are immune to policy initiatives and programmatic thrusts and therefore cleavages in the society remain largely unaddressed despite experimentation with new policies and higher budgetary allocations. The analysis is helpful in developing a perspective why some of the policy initiatives being mooted by the government such as privatization, introduction of the voucher system may not work as the reform measures would not make a dent on the informal system marked by patronage and rent-seeking activities. Notwithstanding better performances of the private schools, albeit marginally, the actual teaching-learning process in the private schools deserves more attention from researchers, the book argues.

In the fascinating chapter on Teaching and Learning: The Practices, Hriday Kant Dewan argues emphatically why focusing merely on learning will not do unless value education is imparted to make the students good citizens. This details why the participants and various stakeholders should be clear about the role of education as otherwise the system would remain trapped in our obsession with numbers, logistics, and compliance with the daily rituals in the classroom. The chapter provides rich insights into the actual teaching-learning practices within the classroom as per the objectives of the National Curriculum Framework (NCF, 2005), on how the socio-economic background of the students and attitudes towards them matters in the actual delivery system. The failure of the teacher training programme has been well elucidated within the approach developed in the chapter.

The concept of equity in education has been framed in the context of the theme of the book by Vimala Ramachandran. The inequity in the provision of the education system continues to reproduce and accentuates the existing inequalities. With three types of schooling, formal government school, non-formal centres run or supported by the government and the fee charging private school with the wide variation in the socio-economic backgrounds of the students, the divisions in the society get perpetuated. The non-formal schools with locally recruited teachers who are paid a small salary have a high proportion of students of less well-off, usually girls and the socially marginalized, and private schools have a high proportion of the better off, especially upper caste boys and a low proportion of SC/ST children with government schools lying in the middle of the spectrum. In effect, the poorest of the poor suffer more as both the states exhibit lack of seriousness in context-specific planning to address specific educational needs of the deprived lot.

In the last chapter, the authors pitch for overhauling the system through appropriate measures which do not relegate the invisible part of the governance structure, the informal system of unstated rules and practices from the ambit of policy making.

What is implicit in the arguments developed in the wide array of issues raised in the book is that education deserves special attention and a compassionate hearing from the policy makers and dedication on the part of the participants and the stakeholders. The administrative set up imposed on education has resulted in policy failure. Tinkering with the system in the name of new policies and programmes, rewriting of rules and regulations or even privatization in the name of increasing efficiency in the delivery mechanism based on borrowed and imported advice will not work unless the system as a whole, comprising formal and nonformal is subject to systemic reform. Ensuring provision of good quality education has to go beyond our obsession with numbers, logistics and resource allocation, the editors plead.

The analysis of the institutions is richer than what could be possibly understood and analysed within any particular theoretical framework. The book is embedded with rich insights and a very nuanced analysis of the school administration set-up in India which very aptly exemplify the credentials of the two editors in their respective fields, Rashmi Sharma who is an IAS officer and Vimala Ramachandran who is the Managing Director of Educational Resource Unit (ERU). The book is not only of interest to those who take interest in the actual functioning of the education system in India but for all those who are interested in developing a true understanding of the governance structure.