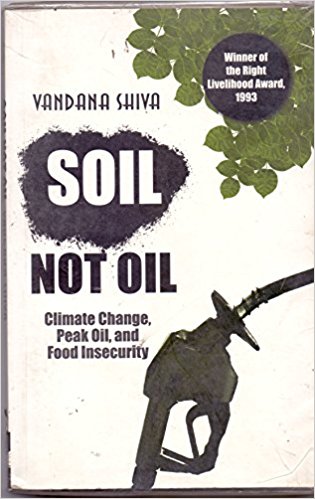 Vandana Shiva has been a powerful voice for the rights of the dispossessed in an era of unequal, elite-led globalization. She has long rooted for maintaining biodiversity, and has shown that a bottom up approach to sustainability and conservation is both desirable and possible. In her latest book, she turns her attention to climate change, and how the global elite’s obsession with the ‘good life’ is destroying biodiversity, lowering food supply, and endangering the planet.

Shiva argues that climate change is the result of the unsustainable energy needs of the global elite. The current global regime designed to tackle the problem offers solutions that are spurious at best, and negligent and even more debilitating at worst. Implicating the system of carbon trading, Shiva’s research points out all the loopholes in the system usually glossed over by carbon trading enthusiasts.

The system privatizes the atmosphere, which is part of the global commons. The emissions rights granted by the Kyoto Protocol are much more than those required for reducing greenhouse gas (GHG) emissions. This translates into huge profits for the corporate sector, on the basis of an intangible commodity. Further, the very commodifi-cation of pollutants means that the incentive to continue their production for profitability is very high, defeating the purpose for which the mechanism has been created. The trade is between polluters, making it a ‘polluter-gets-paid’ system. All of this is being done without any actual reductions in GHG emissions, or any substantive changes in energy-intensive industrialization.

While climate change worsens in its magnitude and impact, the world is soon reaching a point where the demand for oil will outpace supply. This point, known as ‘peak oil’, is expected to place further burdens with an end to the supply of cheap fuel. Some estimates state that the world will reach the peak of oil production by 2030. However, a recent and relatively unnoticed piece in London’s Financial Times said that world reserves of oil have been overstated and that the peak oil period may be as imminent as 2014–15. If this turns out to be true, and there is little harm in erring on the side of caution, the pressures related to energy use are even closer. One of the fallouts will be that the race to create fuel out of crops, which is already in various stages of experimentation, will be speeded up. Biofuels, Shiva argues, is yet another false solution.

Biofuels are primarily being developed as a fuel substitute for vehicles. The world auto production has increased exponentially. As fossil fuel production declines after reaching its peak, biofuels are expected to ensure that vehicles do not stop running. The viability of biofuels can be contested on several grounds. Firstly, biofuel output is less than the investment made in terms of resources and technology. The return per unit of fossil fuel used in its production is very low. Thus, if the entire production process were to be accounted for, it is highly emission-intensive, and thus, no solution at all.

Secondly, biofuels divert land from food crops, worsening food security by reducing availability of essential food crops and increasing their overall prices. The burden-sharing will not only be disproportionate along national lines, but also between the global elite and the global poor. The book draws upon the example of the auto industry. India is among one of the fastest growing auto manufacturers worldwide. Vehicular pollution in India is very high and is a health hazard. Government policies have increasingly privileged the car-owning elite of the country by supporting related infrastructure, to the detriment of public transport as well as other non-polluting, traditional means of transport. The country has already witnessed widespread protests against the acquisition of agricultural land for industrial purposes, a move that has seriously mpinged on the livelihood of the rural, predominantly agriculture-dependent masses. What is perhaps less well known is that use of land for growing biofuel crops is also being vehemently opposed, such as the experiments with jatropha in Rajasthan.

Shiva questions both the material and ethical underpinnings of a society dependent on non-renewable, toxic energy sources as well
as what she emphasizes are false solutions. She states, quite correctly, that no society can possibly be a post-food society. The gross negligence of food security at the expense of oil security is based on skewed notions of development. Equating development with the economic prosperity of the beneficiaries of globalization is as myopic as equating choice with the increased availability of consumer goods.

The proffered solutions to current problems are technology-driven and mechanistic, which is again a very reductive view. Solutions based on geo-engineering are particularly foolhardy. These solutions, such as modification of solar radiance, carbon sequestration and ocean fertilization, interfere even more with the planet’s natural rhythms. In spite of failures and proven negative impacts of these experiments, they continue to receive support.

The worst casualties of energy-intensive globalization are sustainability and democracy. In a bid to gain control over more and more natural resources, purportedly to achieve ‘growth’, the rights of the most marginalized have been wilfully ignored. In India, more and more local-level protests are being clamped down upon, with the state’s coercive machinery
being used against its own citizens in order to protect corporate, elite interests. Further, globalized supply chains are increasing ecological footprints, reducing sustainability and killing local self-sufficiency. As she states in the book, all the solutions being offered in the face of climate change are also merely a temporary respite for the privileged, for they too cannot escape the consequences for long.
Shiva’s greatest strength is showcased once again—her ability to grasp and articulate the fundamentals of the problem. Beneath the plethora of facts and figures are philosophical underpinnings of distributive justice, equality and a concept she herself has formulated—that of Earth Democracy. Earth Democracygoes beyond the anthropocentric view of governance to a far broader, deeper notion encompassing all living forms and the ecosystem.

This contribution becomes even more valuable in the light of the fact that there is very little serious writing emerging from India on the issue of climate change that is not overwhelmingly focussed on international negotiations, or packed with confusing scientific and economic data and jargon-laden. It is a refreshing departure from the overtly nationalistic tone of a lot of the research on climate change, never losing sight of the basic, humane ethic, whether in India or any other part of the world. Grounding the problem in the debate on globalization adds a broader perspective and forces the reader to rethink the political basis on which the problem of climate change is being dealt with. The text perhaps could have been edited better—repetitions make it a clumsy read in parts. However, the book only bolsters what we already know—that Shiva is an institution by herself.