The Idea of Namdev: Reconstructing Memory 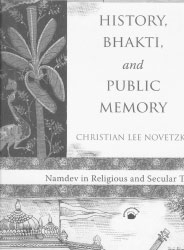 If one were to write a history of Namdev and trace the traditions that bear his name, how would one set about doing it? There is no historical record of his life and composition, either in court documents or in inscriptionsa fate he shares with most great bhaktas or devotional poetsaints of medieval and early modern India, North and South. Yet there exists no doubt that Namdev was a real person who lived sometime before the fifteenth century; his generally accepted dates are 12701350 ce. He is different from most other poetsaints however, in that he has north and south Indian trajectories which diverge considerably at times, though both recognize that he was of low social origin. In Maharashtra, he is a tailor with family but not inclined to domesticity or catering to it, characteristics he shares with Kabir. In the North, he is from the calicoprinting community. There are also disputes about his place of birth and death. However, more importantly, in the North, he is generally regarded as a nirguna bhakta, or devotee of an attributeless lord; his verse is included in the Adi Granth.

In Maharashtra, Namdev is regarded as a saguna bhakta or devotee of a lord with attributes. His intimate connection to Pandharpur, the great pilgrimage centre in Maharashtra, and his embedment in the Varkari tradition stand undisputed there. Yet, both traditions agree that Namdevs guru,Visoba Khecar was a Nath/Yogic figure. In how far do these differences matter?

In this, his first monograph, Christian Lee Novetzke sets out not to document these differences or indeed to trace and evaluate for authenticity the sparse historical data accessible through verse and sectarian literature. He uses these much more to reconstruct the memory, or rather memories, of Namdev in the devotional communities that kept alive the idea of Namdev through five centuries. For Namdev is remembered not only in his verses and hagiography, but most of all in performance, at festivals, in theatre, and today also in recordings, televsion. and film. What is the history of these memories as sustained by successive bhakti publics?