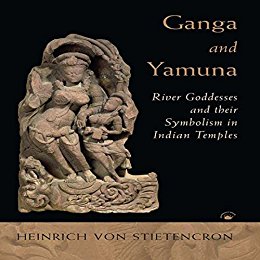 Max Weber spoke of man as a meaning making animalspinning constantly and being suspended in webs of meaning to make sense and give an orientation to the world that he lived in and wished to order. Such a formulation seems to lie at the basis of Heinrich Von Stietencrons study of the iconography of the Ganga and Yamuna on temple doors. Departing from conventional analysis of these icons that were largely interpreted within a political framework, he draws on a rich corpus of symbolisms that he interprets mostly textually to draw his own formulations on dualist Indian traditions.

First a brief look at the iconographic landscape of India with relation to three divinities, the Ganga, Yamuna and Sarswati, the first two associated with very visible rivers and the last with a mysterious invisible stream, the history of which surfaces in unexpected ways.

Stietencron himself is concerned primarily with the recurrence of the images of Ganga and Yamuna as divinities on their respective vehicles/mounts or vahana (the former on a crocodile, marker of strength and robust energy and the latter on a tortoise associated with both wisdom and time or kala that can have death associations as well) in a number of temples from the 6th century, not just concentrated in the nucleus of Gupta rule (in north India on the Doab) but scattered elsewhere including the Deccan as well.