The Economic Route to Regional Security 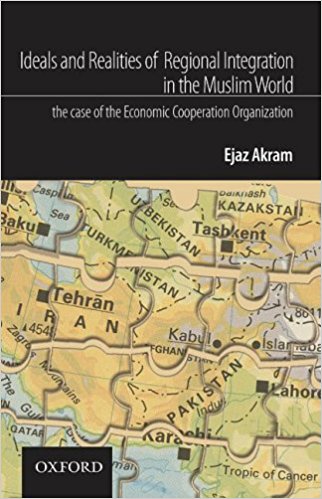 The Economic Route to Regional Security
Gulshan Dietl
IDEALS AND REALITIES OF REGIONAL INTEGRATION IN THE MUSLIM WORLD: THE CASE OF THE ECONOMIC COOPERATION ORGANIZATION by Ejaz Akram Oxford University Press, 2009, 266 pp., 495
June 2009, volume 33, No 6

The Economic Cooperation Organization is the fourth incarnation of the regional group that goes back to the peak of the Cold War. In the mid-fifties, the United Kingdom, with the United States lurking in the background, brought Iran, Iraq, Turkey and Pakistan together under the Baghdad Pact to serve as a wall against the Soviet influence in West Asia. In 1958, the Iraqi kingship fell to a republican dispensation that promptly withdrew from the Pact. With Baghdad gone, the Baghdad Pact renamed itself the Central Treaty Organization. In 1964, the nomenclature changed yet again to Regional Cooperation for Development (RCD). Whereas the earlier two were military organizations, the RCD was formed to provide economic, cultural and technical cooperation. In 1985, the RCD member-states—Turkey, Iran and Pakistan—chose a new name for the group: Economic Cooperation Organization. In 1992, Tehran mooted the idea of reviving and expanding the dormant organization and hosted its first enlarged summit in February. The members included five Central Asian states, Azerbaijan and Afghanistan besides the original three. It is now a ten member group.

The author has provided a useful theoretical context for the study. The Realist, Neo-Realist as also the Social Constructivist debates on regional integration are scrutinized in great detail. The contributions to the IR debate on Regionalism from Altiero Spinelli to A.S. Bhalla are acknowledged and examined. Comparative perspectives from the groupings like the ASEAN, MERCOSUR, SAARC, GCC and, above all else, the EU are incorporated. When it comes to the evolution and expansion of the ECO itself, however, there is no serious attempt at seeking its roots, only a few passing references.

The ECO region is a vast and resourceful area of about 800 million square kilometres with approximately 350 million inhabitants. The territory has abundant resources, including manpower, energy, agriculture and minerals. Like many other regional formations in the non-developed world, the ECO too suffers from neo-colonial regimes, dependency, lack of indigenous industrial and military production capability. Early on in the study, the author introduces an analytical distinction between the two tiers: Kazakhstan, Kyrgyzstan, Turkmenistan and Uzbekistan form the northern belt that is primarily Turkic in language and ethnicity. Its states experienced forced Russian annexation (except for Turkey) and share a similar geographical predicament of landlocked status. The southern tier includes Iran, Azerbaijan, Afghanistan, Tajikistan and Pakistan. It is largely Persian in character and has experienced direct or indirect British influence. The northern tier states are rich in oil and gas; the southern tier has agriculture and manpower. The necessary infrastructure to mobilize their own resources for development and facilitate access to one another is lacking. The intra-region trade figures are dismal. None of the member-states are each other’s major trading partners. The northern states trade with Russia, the US and the EU, while the southern with China, Japan, EU and the US.