The Director as Cinephile 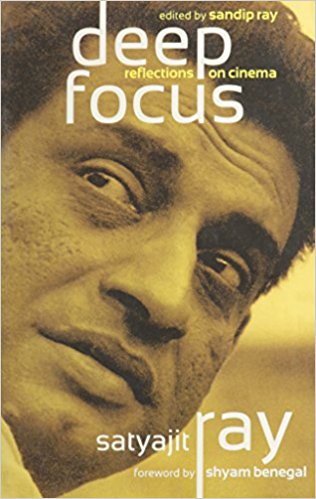 This book is a collection of essays in English by Satyajit Ray, dating from as early as 1949 to 1989, collated from different newspapers, journals and bulletins on cinema from India and elsewhere. Twenty-two written pieces have been arranged accordingly in three segments titled, ‘The Film- Makers Craft’, ‘Pen Portraits’ and ‘Celebrating Cinema’, which range from his contemplations on film making practices within the commerce driven Indian film industry, arguments on cinematic styles and approach, questions of adaptations from literature to cinema, history and practice of the silent film form, comments on directors like Antonioni, Bergman and Godard and analyses of film festivals. Shyam Benegal in his foreword remarks on how Ray’s ‘consistent view of the cinema he favoured’ is reflected throughout these essays. According to him, despite the problematic lack of engagement with popular Indian Cinema as well as the ‘dated’ content of some of the early writings, this book can serve as an introduction to Ray’s thoughts on aesthetics and production of cinema. Similarly, in his preface, Sandip Ray duly mentions that this compilation follows Our Films, Their Films (1976); however, unlike the previous collection which was published during Ray’s lifetime, this volume has been a significant archival endeavour by the Society for the Preservation of Satyajit Ray Films.

Therefore, Deep Focus with its assemblage of photographs, film stills and sketches interspersed between the writings as well as posters and lobby cards designed by Ray primarily aspires to be a collector’s edition. In a sense then, this book attaches itself to the legacy and position of Satyajit Ray as one of the foremost auteurs of Indian film tradition. Having stated the objective of this compilation, this review would like to focus on Ray’s articles, which bring out various facets of film making as art and industry, not only from his experience as a director but also an ardent cinephile. By reading his articulations as that of a twentieth century cinephile, this reviewer wants to draw attention to the snippets of film practices and culture that are scattered in these articles, which point towards untold histories of early cinema in India.