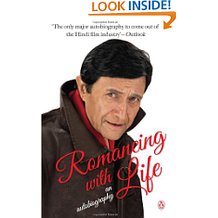 Situated somewhere between an autobiography and a memoir, Dev Anand’s narrative of his life and times in the Bombay film industry and his rise to stardom, opens up certain contradictions which are usually connected with a star’s autobiographical project. The book comes across at the end of an intersection of media texts such as his films, publicity and promotional materials, commentaries and film reviews in popular press along the years that have already constructed a star image and iconography of the actor’s screen persona by privileging his charismatic and debonair ‘romantic’, ‘evergreen’ hero typage. However, in this ‘first ever full-fledged memoir by a leading Bollywood star’ the narrative unfolds in ways which goes on to prove how Dev Anand as a certain kind of star is not only inscribed by media discourses in the cultural memory of a movie-mad nation, but also how Dev Anand as an autobiographer, producer and director of his own films self-consciously or otherwise colludes in the fabrication and mythmaking of his own image.

The preface to the book dwells on the question of autobiography and writing of the self: for Dev Anand on the one hand it is quite easy to narrate the story of his life as you do not need to invent characters and incidents; on the other it is difficult, for such writing, necessarily about non-fictional characters, is linked with an honest and truthful narration, that is hard to avoid. Still, conscious of his star persona, he would like his autobiography to take his readers to the same plane of adulation that his larger-than-life reel image has always enjoyed. Dev Anand fends off charges of ‘narcissism’ and excessive investment in the self ‘as a popular star, the image of Dev Anand is like that of a deity to his millions of fans…to honour this image, I must project myself as the best I can be in both my personal and professional life.’

Narrated in almost a linear and episodic throughout the book, the Dev Anand that is described with candour—the youth in the 1930s—Gurdaspur and Lahore and his early days of struggle in Bombay—emerges only marginally as a romantic lover. Instead his bildungsroman consists of episodes of eroticized tales of sexual awakening and coming of age of a passive, shy and vulnerable boy who is surrounded by a chain of women and seduced by them repeatedly. His break from his small-town past comes as he dreams of making it big in the ‘mecca of films’; ‘the great cosmopolitan city’ Bombay to which he escapes from home following intimations of immortality in front of his reflection in the mirror as he thinks ‘I want the world to see me, admire me. I am going to be an actor—I am going to be a star between them’. In fact, the whole book is studded with his insights into the nature of stardom itself: ‘sudden spontaneous, magical reaction to a face or a personality and his or her behaviour on screen is what stardom is about.’