The Critic, the Text and the World 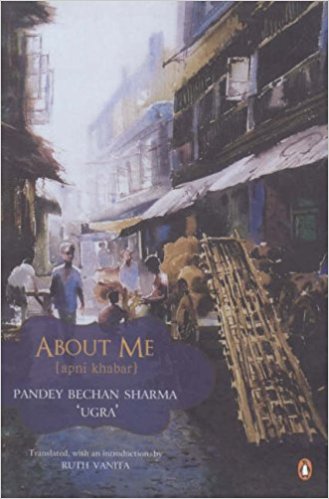 Recognized as the first original memoir in Hindi, Apni Khabar spans half a century of its authors engagement with the contemporary socio- polity from the vantage point of the problematic of his ‘writings.’ Ruth Vanita the translator, at the outset, appears to be aware of the epical task that lay before her. And she has succeeded admirably in her dual task: on one hand she prises open the double hinged lid of the Pandora’s box to let the tide of the text flow smoothly, and on the other to offers the connoisseur the essential flavour of the hidden recesses of a bygone era. About Me confronts the readers not merely from a perspective overt and obvious; it also ensnares them within a well laid out discourse initiated by a critical introduction. About Me is essentially ‘Ugra,’ not because of the controversies Ugra was involved in and was largely labelled to have generated as a design, but more specifically because of the when and why of the controversy creation and owning up.

The first half of the 20th century has been cataclysmic for the human civilization; for the subcontinent, its temporal significance lay in the way it paved ways to confront an ancient civilization that lay in stupor. About Me, as personal history is acutely attuned to these reverberations, it sustains and up to an extent retains the tradition to not merely mock but also parody. For this it invokes Tulsi. While the saint poet rendered an epic to the commoner, Ugra’s historio-biography, despite its demolition of many a giants enroute, erects a discourse that assimilates a range of historical personages from Nirala to Kamalapati Tripathi and deliberately foregrounds the lesser ones like Babu Shivprasad Gupta ‘second only to Gandhi’ (It is through the translator’s notes which run up to 113 in number we come to know that it was Babuji who founded the newspaper Aaj and was a major influence on the great icon of Indian freedom struggle Chandrashekar Azad) to offer a more inclusive peep into his life and times. About Me strikes this fine balance not merely between diverse personalities, it also maintains the critical sensibility as it deals with the places; Chunar the birthplace is what Ugra yearns for as he explores Benares, Calcutta, Bombay, etc. The critical temperament of About Me is foregounded through a narrative structure wherein a world is inhabited with encounters, rather than personages; the ‘text’ occupies the critical space generated by these encounters that take place in the ‘world’.

We come across the critic and hence the critical temper in the first chapter titled “About Me” as the initiator and initiated and consequently in the final chapter titled “My Life: A Summary”; where Ugra appears in person to cap it appropriately with a concluding note. The temper – a unique amalgam of mockery and satire – flows undaunted, passionate and dismissive. It emerges in the form of a text yet unknown that has emerged from that particular era. The potency of the text may be located in the details that lie bare the stark reality of a poor Brahmin boy’s [growing] pangs in a relatively unknown town Chunar. His very being is steeped in a spiritual context that gradually unravels itself as spurious, but one which initiates and exposes him into moorings where Ram and Ramayan are not mere words but survival/existential essentials for subsistence with majority of upper caste brahmins.

The boy Ugra grows and matures in an environ where gambling, drinking and prostitution formed the backdrop of pseudo- spiritual masque erected day in and day out, whilst the essential fabric continued to collapse into penury. His plight brought Ugra in contact with rambling Ramlila troupes where his innocent ‘boyish’ visage turned into an ‘image’, i.e., an image of God on the stage and a receptacle of sin at the back. It is this agony, the anguish and the remorse that shapes Ugra’s subsequent encounters/‘khabar’ as either demonic or Godly. If at one end of the scale is Mahant Bhagwatdas ‘the courageous, vigorous Sadhu’ on the side is the old classmate turned successful politician who could do what he (you) wanted to!,’ Pandit Kamalapati Tripathi. We come across the lecherous Ram Manohardas and the beguiles of Bacha Maharaj of this world, and be simultaneously be in awe of such sublime and divine presence of pure souls like Lala Bhagwan ‘Din’ and Babu Shivprasada Gupta. While we delve in the ebb and flow of the encounters of rare passion, a sudden spark suddenly illuminates the otherwise tepid world. The unique style of About Me, generally appreciated for its all-pervading satirical remorse, nevertheless has a rare matter-of-factness that is typically Ugra’s; he can negotiate with such larger than life figures such as Shajindranath Sanyal and Rajendra Lahiri with disarming ease and can also downplay his own association with them so as to be self-effacing.

As a memoir About Me fuses the distinction between the person and the place as well as between the text and world. But the author and the critic retain their distinction and the critic and all the while the critic remains outside the text. However another kind of binary surfaces as the narrative trudges along; it is midst places and people: Chunar/ Benaras, Mirzapur/ Calcutta and Bombay/ Ujjain binary is sustained till the very end. We realise as readers that it is not only the writer who had survived the vagaries of his abject poverty, even his prose had the audacity to not only sustain the pangs of sub-continental transition towards modernity, but also to retain it in a rare temper and tone, now almost extinct.

Any categorization of About Me would be an appropriation, an oversimplification of a ‘discourse’ that strives passionately to establish a dialogue between not merely the author, certain historical figures and the reader; the real endeavour is to establish a dialogic space that deletes inhibitions even as it draws and drags you within the lecherous world of ‘sins’ manifold, to emerge if not in calm of mind at least better informed. It is this world that the text has generated which ultimately succeeds at least in creating a bond, a bond with a voice that is no more amongst us, a temper that till the very end remained in eternal confrontation to weed out like ‘Chanakya’ whatever is superficial and shallow.

Apni Khabar in its new English avatar as About Me, draws immediate comparison with the pantheon of characters introduced by Chaucer in The Canterbury Tales. The extended similarities and contrasts could be drawn in terms of kind and range of persona and in the depth of rendering their physiognomies. One gets drawn towards establishing parallels between, The Friar and Mehant Ram Manohardas and The Wife of Bath and Bacha Maharaj. Both Chaucer and Ugra hold contemporary relevance as their narratives belong to and help the reader to recover a bygone era in all its inherent complexities. The rendering of character in About Me could be traced at a yet deeper level in terms of comparison. Isn’t Nirala’s character, quite palpable, wherever it appears in the narrative, a remarkable psychopathological delineation a la Dickens?

As a translated text About Me offers two important add-ons, one a critical introduction in the beginning which in its own way prepares the reader as it introduces not only the author along with his idiosyncrasies but informs through the iconoclastic life style of the author that what lies in store ahead. The introduction is punctuated with brief details of other works by Ugra and hints at the nature of the oeuvre of the writer through her own experiences as a translator. The second, the translator’s notes at the end are comprehensive and provide rare insight not only about the text in hand but more importantly about the socio historical and cultural context.

But for the reader who has read the original in Hindi, About Me would certainly be a significant addition to the list of serious indulgence, aesthetic as well as critical. Yet while one wades through, particularly the one who has read the original; one records the limitation of English, the language. Howsoever dominant it may be, English appears sterile in comparison to the passionate intensity of Hindi and delicate sobriety of Urdu as a medium. There are a few inadvertent omissions in proof reading. For instance on page 61 the title should read Rammanohardas not Rammanshardas.

Somewhere in the introduction the translator has mentioned that Ugra was considered as the progenitor of ghaslet literature. Let us hope that with the crude oil shooting up, About Me would propel the fiery narrative of Ugra towards its rightful place in the mainstream literature.