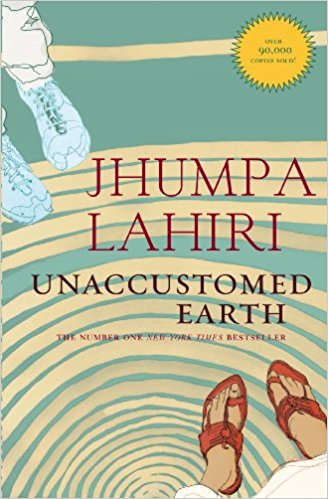 The epigraph by Nathaniel Hawthorne sets the tone of this new short story collection by Jhumpa Lahiri; for human nature to flourish, it must have other birthplaces and strike roots in ‘Unaccustomed Earth’. Lahiri’s collection of short stories falls into two parts. The first part takes on a meticulous detailing of people and places, and makes fastidious notations of mood and ambience. The eponymous story – ‘Unaccustomed Earth’ – interestingly presents two points of view. Ruma as the daughter who after her mother’s death is faced with the dilemma of taking care of her retired father. The story also presents the point of view of the father who feels liberated as a widower and takes time off to travel – travel that indicates adventure and the formation of new ties, also a renewing of bonds.

Lahiri shows that the father’s green fingers can nurture the unaccustomed earth to the promise of new beginnings. The oxymoronic title of ‘Hell-Heaven’ is narrated through the eyes of Usha, a young child and moves through to her adulthood. In the process, we are presented with precious vignettes of immigrant lives, its loneliness, little joys, personal anguish and community anchoring. In ‘A Choice of Accommodations’ the couple Amit and Megan take a break from work and children, to attend Amit’s schoolmate, Pam’s wedding. Lahiri brings alive the heady school times, its lingering nostalgia for home and parents, its loneliness and the Yuletide warmth and hospitality extended by Pam and her father who was the school headmaster.

There is a sadness that tugs constantly in the story ‘Only Goodness’. It depicts the immigrant Bengali family’s travails of coping with an alcoholic son Rahul. He represents the scary/humiliating side of a family member, given over to alcohol, a living shame for the parents and the community. Sudha’s attempts to salvage her brother’s life are thwarted time and again, an effort that almost wrecks her marriage. The bathtub scene gives one goose pimples as her little son Neil plays in the cold bath tub, totally unattended and vulnerable. There is no goodness in the story, which unwinds like a dirge. ‘Nobody’s Business’ underscores the unanchored lives of people sharing house. The housemates move in and out of the house and through relationships marred by betrayals. Paul a housemate is like a camera, looking down inside the house, looking out through the windows, recording everything. The recordings reflect the outer surface, the sequence of events, the eye of the camera however fails to plumb the inner depths.

The stories mostly represent the immigrant experience of the parents — first generation immigrants – who are also tied to filial bonds in India/Calcutta. Their mandatory annual trips home are resented and resisted by the second generation as they grow up.

In an interview (Outlook, 14 April, 2008) Lahiri said that she represents the last of the immigrant line and her children are beginning a new line. It is the experience of the past, her family and home that nourishes her present – it is this she attempts to capture in her writings. This is her first collection since The Interpreter of Maladies (1999) but while there is a sense of continuity, the tone is sad and unflinchingly realistic.

The second part of the collection entitled ‘Hema and Kaushik’ has three inter-connected stories stretching a little over a hundred pages. The first story, ‘Once in a Lifetime’ is narrated by the six year old Hema who gushes about the rich sophisticated guests, visiting them. There is a deep sense of self-assuredness in all the stories, whether seen through the eyes of a young girl or by the mature young lady of thirty-six that Hema grows into. The characters traverse the unaccustomed earth and in their rites of passage there unfold interesting stories. Families do not always constitute a sence of security, they can also be spaces of isolation and alienation, corresponding to the space outside.

The language is simple and conveys the mood and the nostalgia of fragmented lives. Places redefine people and relationships, some of which reach an inner mellowness. Most stories are long; they also drag with long-winded descriptions. The style is not racy, but relaxed demanding patient reading.