Of Dreams and Nightmares 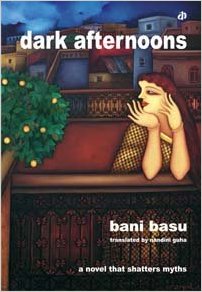 With this rendering of Bani Basu’s novel Kharap Chhele, published in 2001, Nandini Guha earned Katha Award for translation. A novel that claims to shatter myths, ‘Dark Afternoons’ is about a shocking discovery a woman chances upon as she struggles to make her afternoons meaningful. The novel employs shocks for punctuation and is about unchanging reality of domestic life, deviant sexuality, dysfunctional family, homelessness, orphans and prostitutes. It is about NGOs’ and the limited notion of education championed by them. The novel unfolds in a typical middle class setting with Jina as a pivot of its narrative. She finds a partner in Mallika as the two females married to brothers in a family live their nightmares and dreams. Nightmares are frequent visitors in Mallika’s life in the afternoons, but for Jina these are opportunities to change the reality to further the cause of her dream world. The manner in which Mallika and Jina respond to nightmares makes the novel an interesting read.

If the former passively lives her dreams/nightmares, Jina intends to do something about them and in so doing conform to orthodox sexuality.

Jina marries in hope of finding freedom and completeness only to learn that she is in the family for the happiness and convenience of Nikhil. Possessive about Jina, Nikhil causes separation of the family for reasons beyond the comprehension of his wife. Her searching questions to Nikhil bring her the charge of scheming against him. Trapped in a childless marriage that reduces her into boring servitude to her husband’s wishes, she seek s escape and autonomy through work; a work that would give meaning to her dull and empty afternoons. Mukut, her friend working for WHO, steps in and finds her a teaching assignment in adult education programme meant for prostitutes. Initially hesitant she takes up the assignment without seeking permission of her husband still she cares to inform her father-in-law Kalyanchandra – though vaguely – about her assignment. It is Mallika who first becomes privy to Jina’s involvement with the education of the prostitutes/fallen girls and questions it. Jina however seeks to reorient Mallika’s hegemonised gaze through stock stereotype: “think of the fallen men for whose pleasure exists a whole colony of women who have no fathers, no husbands, no sons, no childhood, no friends, no lovers, no days, not even normal nights. To quieten the stomach, these women hire out their bodies”. This missionary zeal of Jina, though abetted in part by patriarchal patronage in the persona of Kalyanchandra as a liberal patriarch is thwarted by the ironic turns of events that virtually recoil on her.

Kalyanchandra as a liberal patriarch starts teaching children of prostitutes. But he is soon attacked for imparting special coaching to prostitutes Bonomala and Purnima. In the meeting that followed to discuss attack on Kalyanbabu where Bonomala was to be present as a witness, sitting in Bonomala’s room with Mukut and others, Jina gets shock of her life. Her husband enters the room as Photikbabu, Jina falls into a dead faint learning Nikhil as the fallen man. When she hears Bonomala utter – “I’ve lived exactly like a wife. In the last six years I haven’t been with another man”, Jina resolves to marry Bonomala to Nikhil not realising that she would reject the proposal calling Nikhil a liar and a cheat.

Jina, though a protagonist with liberal intents, however, is ignorant of the complexities inherent in her quest for modernity. It is here that Bani Basu’s novel evolves as a critique of utopian modernity. Jina’s ‘ignorance’ hinders her apparently bold attempts to face the crisis in her marriage, and reflects on her understanding of modernity. Modernity is about unlearning and is regenerative but when living the symptoms of modernity becomes all too important, Jina and her like become the first victims for being females tied to their husbands. They fail to see through the disease causing such symptoms and expose themselves to the contagion called modernity till it multiplies like free radicals. Modernity then is not an investment in self but in chasing and faking the symptoms till exhaustion sets in where violent denial of the self results in violating the self of others.

However at this very critical movement the plot seems to lose its bearing. Even though Jina faces the bitter truth of marriage she plans to force a marriage on Bonomala with her fallen husband. And when Bonomala resists, modernity leaves Jina clueless of a response free of self-denial. Caught in the web of symptomatic modernity and carrying the guilt of her husband’s wrongdoing the only solution she could think of is surrendering her right to husband in favour of Bonomala. The boy Kutush whom Kalyanbabu intends to bequeath all his possession goes missing. The suspicion immediately fell on Nikhil, and Kalyanbabu’s searching queries offer no relief while Jina lives this unending nightmare of missing child. Mallika at the end identifies the tiger in her nightmares, kills Nikhil as Kalyanbabu figures out the truth between Mallika and Nikhil and forgives her forgetfulness because the tiger in the nightmare is none other than his son, Nikhil.

The novel full of action however stops short of reflecting on the several issues raised in it. A riveting tale, this novel explores the problems of modernity as perceived by females who settle with being followers of cheap role models of modernity for whom modernity is but an itch. The regimen of self-denial, espoused by female characters, is too poor to lead as it reinvents itself in the garb of self-assertion inflicting pain on others as well. Though the translation catches the spirit of Bangla it can, nevertheless, be read as an independent work as well.