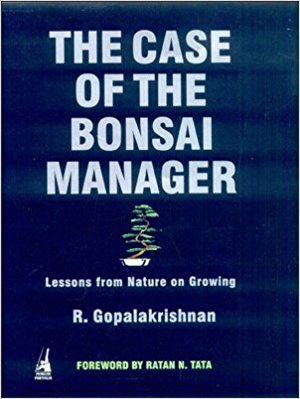 The Corporate Classroom
Nandini Vaidyanathan
THE CASE OF THE BONSAI MANAGER: LESSONS FROM NATURE ON GROWING by R. Gopalakrishnan Penguin, 2008, 264 pp., 450
June 2008, volume 32, No 6

Good managers are those who acquire skills on their own initiative. They don’t wait for someone at the workplace to teach them. And if they have this propensity to learn on their own, they can survive in any situation they find themselves in without losing time or skill. Besides once they acquire the skill, they know how to disseminate it to all other members of the team, so that collectively they are able to perform better, adapt to changing circumstances and carry forth, without losing foothold.

There are other managers, good guys, who acquire the skill in pretty much the same way, but do not think it is important to disseminate it to their team either because they don’t think it is their responsibility or because they are proprietary about it.

In the early 1900s, milk was delivered by trucks to one’s doorstep in UK in open bottles. They had no caps. So the cream would rise to the top. Somehow both species of birds, the blue tit and the robin, discovered this rich source of nutrient food and both got into the habit of dipping their beaks into the bottles every single morning. Their digestive system had to reorient itself to the richness of its breakfast and over time, it became a tradition that lasted for nearly forty years and several generations of both the species

In 1940, with new technology, the milk bottles acquired an aluminum seal. So neither species had access to their creamy breakfast. But this denial worked differently with each of them.

Within a decade or so, the blue tit had acquired the skill to pierce through the aluminum seal and eat the cream from the bottle. The robins never figured it out. One odd time, one odd robin did manage to pierce it, but as a species they never acquired the skill.

Professor Allan Wilson, a zoologist at the University of California at Berkeley had an interesting hypothesis. He said that not only had the blue tits managed to learn a new skill but they had managed to propagate that skill to the entire community and this skill came in handy wherever they migrated. As a species, the blue tit had learnt not only to ‘innovate’, i.e. acquire a new skill, but ‘socially propagate’ it i.e, to pass it on to other members of the species through direct communication and socialization. As they were migratory birds, they also learnt to adapt to new environments with new skills.

According to Wilson, it was this behaviour of a species and not environmental changes that was the driving force for evolution. The book is full of such interesting parallels from nature and a whole new terminology has evolved to describe the behaviour of managers who flourish in their natural environment and those who do not because their growth has not run its full course, and therefore become ‘bonsai’ managers.

The difference is that whilst bonsai cultivation is an art and is considered by the Japanese as an ornamental plant and a thing of beauty, in the context of the manager, it is a condition which should be avoided like the plague.

The 1950s and the 60s saw, at least in Western Europe and North America, a management style that was obsessed with control, productivity, direction and tightness. All success stories of those days exemplified these qualities in managers as virtues. Logical thinking and analytical techniques became the fulcrum of management courses. Leaders were expected to direct their teams and in order to be able to do that successfully, they had to know more than their teams.

As the book insists, knowledge is what you know; intuition is what you don’t know you know. Knowledge can be taught but intuition can’t be, it’s something you have to figure out and learn on your own. But when you do integrate the two, the result is wisdom.

According to the author, intuition not only exists but is very important for the manager as he goes up the ladder. Managers who favour an analytical style of leadership as opposed to the intuitive, grow stunted over a period of time because analysis can only help you grow up to a point. I would endorse Ratan Tata’s view that this books is a must read for all aspiring enterpreneurs and managers.

Nandini Vaidyanathan has been teaching entrepreneurship and international business at premier business schools such as IIM-B and Princeton for the last three years, after spending 20 years in the corporate sector.