Evolution of a Management Icon 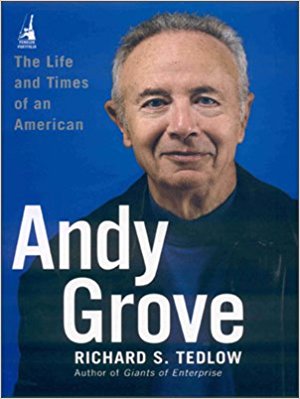 The catchy ad ‘Intel Inside’ on computers used to evoke curiosity in users about the meaning it sought to convey. The man behind making Intel is captured ‘inside’ this book written by Richard S. Tedlow. A treatise on the life of Andy Grove, it covers different phases of Grove’s life and is neatly organized into 30 chapters. It is one of the most comprehensive of Grove’s life and work, who altered much more than the chip industry. The key focus of the book is on Grove’s early childhood, his growing up as an engineer and then going on to set up a business which the world came to know as ‘Intel’. The book then is not only about the life of Grove but also about the making of Intel. The author describes Grove’s early life in Hungary, where he was born and here he grew up under the shadow of the fear unleashed by the Nazis and Communists. Much of what is written about his early life is drawn from Grove’s bestselling memoir, Swimming Across. Thereafter, the author describes Grove’s emigration to the United States and his college life, which was full of struggles and his subsequently joining Intel as employee number three, the other two being co-founders Robert Noyce and Gordon Moore.

At Intel, Grove made the transition from a technologist to a technologist / manager. Robert Noyce and Gordon Moore were not management savvy and hence the responsibility of managing Intel had to be shouldered by Grove. He donned the mantle of operations director and admits that he literally had ‘nightmares’ performing this role. Over a period of time Grove learned the ropes of managing a multimillion dollar organization and has been credited with shaping much of Intel as it exists today. In all this, the author aptly chronicles Intel’s and hence in a way Grove’s growth pains, crises, and struggles to adapt to the rapid technological changes sweeping the world at that time.

The book also highlights the business acumen of Grove when dealing with competition. When competition from Asian countries hit Intel’s memory market, it swiftly decided to enter the PC market before others did and established early dominance. The market dominance was made possible by smart strategic choices made by Intel and Grove and some of these are:

This forced the manufacturers to manufacture PCs with the latest Intel chip and it also captured the mind share of consumers. Through this book, the author also focuses on the emergence of Silicon Valley as a key development in the history of American industry, which promised to many an exciting future and the pursuit of challenging ambitions. The book has been written by collating first hand information from Grove and the author spent a good chunk of his time in a cubicle at Intel’s Santa Clara office; he also draws on Grove’s personal journals. The author describes both the technological and managerial side of Grove in great detail.

For example, Grove’s journal entry in 1971 reads: ‘Management is the art of absorbing a task in one lump from above; cutting it into smaller lumps and pushing them down one level’.

The book is a good guide to understanding business history as well as gives us a peep into the mind of a industrial titan like Grove.

Kuldeep Singh is currently director, Human Resources at US Technology International Pvt. Ltd, Trivandrum. He has taught at IIM Indore and other mangement schools.