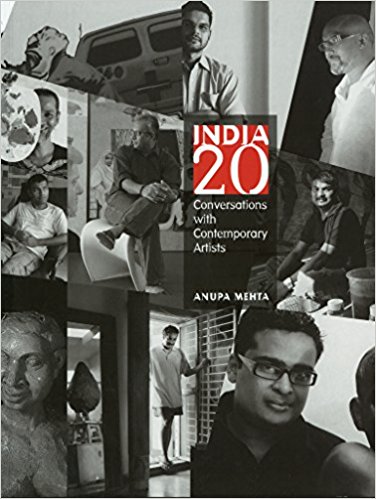 This book cannot readily be judged by its cover for the title of the book suggests an epic sweep through the arts of India using a dialogic mode. This handy compendium in fact is a collection of interviews with some of the more interesting visual artists of out times, offering us an insight into their working methods, their conceptual frameworks and their sources of inspiration.

Jointly produced by the Vadodara-based Alekhya Foundation and Mapin Publishing, this volume was released to accompany a travelling exhibition of the works of the artists in the collection of the Foundation in 2007. The book though is not an exhibition catalogue with only reproductions of art works included in the show. In fact it showcases a ‘wish list’ of works which are currently housed in different collections all over the world. Unfortunately, while some artists like Bharati Kher and Ravindra Reddy have been able to provide details of the location of their works, most of the other paintings, installations and sculptures, reproduced in the publication, appear without sufficient details, making us wonder about the exact nature of the collection of the foundation itself. Collections after all are exercises in cannon formation and books that accompany exhibitions allow us to place the works in their socio-political and historical environments as well as the curatorial narrative of the exhibition itself. Instead this book offers us multiple histories in the form of a conversation about the various twists and turns in the creative methods of the artists, as well as the exhibitory history of their work in the form of a brief biography of the artist appended at the end of each conversation.

The interview format used by Anupa Mehta has a different cadence in every conversation. While some of the more articulate artists like Jitesh Kallat are allowed to determine the direction of the flow of ideas, taciturn artists like Natraj Sharma are coaxed initially with detailed queries, which allow the artist to loosen up in the latter half of the interview. Expansive personalities like Krishnamachari Bose with their capacity for making capricious statements like ‘I am a capitalist so that I can be a communist’ offer some of the most entertaining moments in the book while artists like Anju Dodiya provide the reader with sharp intellectual insights. In fact Anju delineates all the elements of her vocabulary with such clarity that one is immediately immersed into her imaginative world and her way of responding to all that surrounds her. Artists often have long-buried aims and influences, and conversations with skilled interviewers can often help artists to excavate their own work. Anupa is particularly successful in drawing out Anju’s thoughts due to her longstanding friendship with the artist and in her interview Anju is able to reveal a great deal about her formal and conceptual concerns. The intelligence and intellectual rigour with which she applies herself to her work thus makes it more interesting to the viewer.

Not all the artists are treated as sympathetically. For example both Bharti Kher and Subodh Gupta are thrown a googly in the opening questions of their interviews. While Bharati is taken to task over the assembly-line production of her work using several assistants, Subodh is asked a sharp question about the ‘Indianness’ of his work hinting at the possibility of a performative element that makes him wear his markers of ethnicity in order to enter into an international circuit of exhibitory spaces, so as to fulfill predetermined curatorial objective. Both the artists, thus thrown off-balance, appear slightly uncomfortable in their responses to the queries, making us feel as if the interviewer has touched a raw nerve.

The issue of use of skilled assistants is further complicated by Krishnamachari Bose on his take on a collectivized method of working for in his interview he claims, ‘I do employ skilled craft persons or assistants but they never touch the actual work. They execute some of my requirements and learn while they are with me … I’m never comfortable if someone touches my camera or sculpture. I dictate my own visual space’.

This line of questioning is not pushed with other artists even though in today’s context, where artists are required to maintain visibility in the public eye through regular solo shows, almost all artists now work in a factorylike production ambience. The market demands branded works and the central concern of this book is certainly dictated by market forces. Anupa’s introduction to the book in fact touches upon every aspect of the commerce of art. From auction-house strategies, to the art index funds and a collector’s motivations, we get a brief glimpse of how much of today’s art world is driven by the exigencies of the market.

On a different note, the conversations with artists like Sudarshan Shetty, Atul Dodiya and A. Balasubramamiam are particularly poignant, for even though they may be commercially successful, they have clearly not lost sight of their objective, which is a philosophical exploration of the possibilities of image-making. While the collection of the Alekhya Foundation is clearly a result of Kishu Chauhan’s own personal preferences, what is rather surprising is the manner in which male canonicity is maintained through the inclusion of eighteen male artists in the book. Says Chauhan in his foreword: All twenty artists are undoubtedly acknowledged, even internationally, as being among India’s most well-known names.

One is then left wondering why some of the best-known artists of our times like N. Pushpamala, Shilpa Gupta, Surekha and Sonia Khurana, who happen to be women, find no place in the collection. One would have thought that with Anupa Mehta, the former editor of Art India and contributing editor of Asian Art News, anchoring the production of this book and herself a woman, one would have been given a more balanced overview of contemporary practice today. Therefore, one cannot help but point out that while the effort put into the book is laudable and the production is neat, the format glossy and the contents interesting indeed, in this volume on twenty of the ‘most well-known names’ in Indian Art there are only two women artists.

Shukla Sawant is a visual artist and critic. She is currently an Associate Professor of Visual Studies at the School of Arts and Aesthetics, Jawaharlal Nehru University, New Delhi.