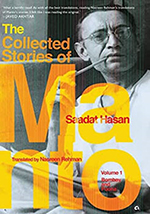 The excerpts* below have been taken from the Introduction to The Collected Stories of  Saadat Hasan Manto–the first of a three-volume series which will contain all of Saadat Hasan Manto’s 255 known stories translated into English by Nasreen Rehman. Nasreen Rehman has written an absorbing and deeply insightful narrative, situating Manto’s work in his life and circumstances, as well as the larger forces affecting him and the people around him.

Despite over four decades of experience as editors it was remarkably hard for us to truncate this exquisitely written piece.

On an unrecorded date in 1937, Sardar Begum bid farewell to Amritsar, a charming old town in the heartland of Punjab and boarded a train down to Bombay, the burgeoning new metropolis by the Arabian Sea. A widow of Afghan extraction, she was on her way to move in with her daughter, Nasira Iqbal, whom she had married off two years earlier to M. U. Khan, an officer in the railways. The widow had reason to mistrust her son-in-law, to whom she had ill-advisedly entrusted her meagre savings. Moreover, Khan’s notoriety as a serial philanderer exacerbated Sardar Begum’s aversion. Yet, she had little choice but to join his household.

Sardar Begum’s late husband, Maulana Ghulam Hasan, who died on 25 February 1932, had retired as a munsif or a sub-judge with the colonial government and should have left her in considerable comfort, but she was his second wife. By the time the Maulana married Sardar, he had fathered nine children, of whom eight had survived and attained maturity.1 Sardar Begum was not accorded the same status as Ghulam Hasan’s first wife. Significantly, she was not of Kashmiri stock.

Ghulam Hasan (1855–1932) belonged to a clan of Kashmiri Saraswat Brahmans who had converted to Islam. The family name, Manto, derived from the word ‘mant’, referred to a weight measure the equivalent of which the clan elders were entitled to collect as rent from peasants.2

SHADOW OF A PATRIARCH

…Among the great short story writers of the world, Saadat Hasan Manto was born in Punjab in a village called Sambrala in district Ludhiana on 11 May 1912. His father, Maulana Ghulam Hasan, was a pillar of the Amritsar bourgeoisie and a prominent member of the Anjuman-i-Islamia, an influential Muslim civil society organization in Punjab. According to Ayesha Jalal, in his leisure hours, the Maulana (her great grandfather) penned works on Islam and the real meaning of self-improvement (jihad).3  Paternal disapproval shadowed Saadat’s life.

…Manto grew up with what comes across in his writings as a profound lack of a father, which may well have fed and, in turn, possibly justified to him his addiction to alcohol.

Ghulam Hasan did not invest the same time, effort, or money to educate Saadat as he had expended on his older sons, whom he sent to England for further education. Nevertheless, he was not entirely disinterested in his youngest son. It might have been better for Saadat’s emotional health had his father remained completely aloof and not forced the poor lad to study the sciences when he was naturally drawn to literature and the arts.

… In 1930, Saadat transferred to the Islamia High School, where the headmaster, Khwajah Muhammad Umar, who taught English, recognized the young man’s proficiency in the subject. Khwajah Sahib took a keen interest in all his students, and under his guidance, the young Manto switched to the Arts. On 23 May 1931, he finally passed his Matriculation examination in the third division. The same year, Maulana Ghulam Hasan ensured Saadat’s admission to the Hindu Sabha College in Amritsar, ostensibly to study English, Philosophy, and Economics for his FA from the Punjab University.4 His dear childhood friend, Abu Saeed Qureishi, recalls how Saadat roamed around college sporting a red and white striped silk kurta with a short jacket. His ensemble duly finished off with a pyjama made of boski, a prized creamy Chinese silk stamped with a trademark of two red horses on both sides of the narrow outer edge of the fabric authenticate every yard Saadat’s rakish sartorial style, his taste for finely crafted shoes, an almost magnetic propensity for daring acts such as literally walking on coals, plus an attachment to music and theatre to the detriment of his studies horrified his father. … More than twenty years later, he wrote of an episode that describes the chasm between Ghulam Hasan, the abstemious legal professional, and Saadat, his raffish youngest son.