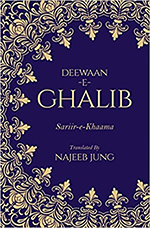 In his book Ghazals of Ghalib, a very novel effort at getting the selected ghazals of Ghalib translated into English by some accomplished poets, Aijaz Ahmad says that ‘good poetic translations, like good poetry itself, are very much a matter of divine luck: talent, skill, and labor have all to be blessed with the divine spark…Success can only be relative; the translator is in an impossible situation and translations of poetry can be not only rarely but also relatively good’ (Ahmad p. xvii). When it comes to Ghalib, who truly belongs to the status of a world poet as also people’s poet in India, any effort at translating him throws challenges of different kinds.  He is not only the most quoted of all Urdu poets, but also remains one of the most difficult poets to understand, leave alone translate.  There are different conceptions of Ghalib in the minds of different readers. However, any translation of Ghalib which helps readers understand the poet better is a welcome addition to the Ghalib canon.

Najeeb Jung’s translation of Ghalib titled Deewaan-e-Ghalib: Sariir-e-Khaama is a brave, almost daring, effort at translating not the selected ghazals of Ghalib which a lot of translators have attempted before, but the whole deewan of Ghalib, consisting of 235 ghazals. Published by Rekhta Foundation, it is a well-turned-out volume of more than 500 pages. However, the pages could well have been brought to far less as there are a number of blank half-pages and the repetition of Urdu text in Roman script in the book. But the repetition does make reading of the text and locating the ghazals easy and convenient. The source text in Roman script is presented through diacritical marks to give a feel of Urdu sounds and word stresses.

It is very tricky to transfer the qafia and radeef, integral aspects of ghazal, in English translation. The translator’s choice of words, and hence meaning and interpretation of the sher, becomes very limited in attempting the rhyme in English. In the same way the unique visual structure of a sher, which is written in the form of a couplet, is an essential part of a ghazal which may consist of five, seven or more shers. Rhyme may not always be important for an English reader of poems as long as the poetic aspect of the ghazal is maintained through other means. However, if the translator can capture both rhyme and the visual structure of a sher, the result can be very pleasing. Thus, Anisur Rahman does that in

My naïve heart, what ails you, what?