The Chronicle of Dying Wells 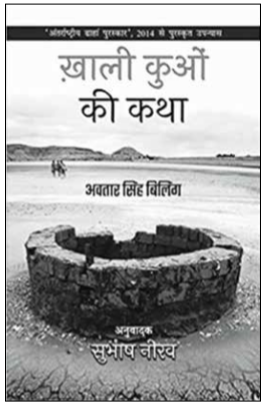 An ardent Punjabi, having lived all my life outside of the Punjab, I am delighted to have been given such an evocative tour de force in Avtar Singh Billing’s novel Khali Kuon ki Katha. This book is my first experience of having effectively entered into rural Punjab in the same way as Thomas Hardy had taken me to the Wessex of Great Britain or Phanishwar Nath ‘Renu’ to Purnea and RK Narayan to Malgudi. Each of these writers possess some special felicity to bring their chosen region alive through words. In Khali Kuon ki Katha the reader traverses into the Dhaha region of Punjab effortlessly, experiences the smells and sounds of the land and gets totally absorbed in the narrative of the novel running over four generations.

The magic is not merely in the content of the novel. It is also in the way the tale is told, the style with which words begin to throb and the language which holds one captive in the exclusive world created by the writer. The setting is rural and authentically so in both the ambience of the locale as well as the behaviour of the characters inhabiting that land. Two brothers married to two sisters, an extended joint family and its intricate relationships along with the complicated social and cultural practices present themselves dramatically through the narration by Pashi, the curious and observant grandson of the elder brother, Charan Singh. Pashi is supposed to have come to Dhaha to spend his vacation at his maternal grandparents’ household which he finds so intriguing and colourful. The narrator’s mastery over details is noteworthy which is also what makes the novel realistic, compelling and charming. Billing’s use of the authentic local language makes the story all the more convincing.