The Big Picture Of History 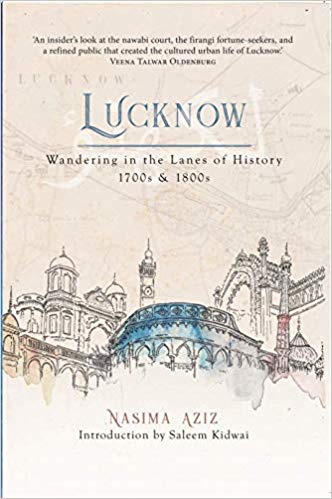 As the title suggests, the book takes the reader on a journey through the most popular period of the history of Awadh—the 1700s and 1800s. The historical scenario is diligently explained; and a peep into the dynamics of the court, the personal lives of the nawabs, and their changing relationship with the Mughal rulers and the colonial masters, makes the book extremely interesting. Saleem Kidwai gives a beautiful description of the essence of Lucknow in his introduction both as a historian and a person born and bred in Lucknow. He sets the pace for the themes to follow and the reader expects a narrative wherein mere wanderings are linked to historical events.

The three parts of the book have twenty-three chapters, with eighteen of them constituting Part One that ends with the annexation of Awadh. So 80% of the book is devoted to the pre-annexation period. Of these eighteen, seven deal with the successive nawabs and their administration. Six, titled, ‘Chehel Pehel in the Lanes’, give an insight into the various beliefs, symbols, gossips, writings, social structures, etc., of the period. For example, the legend of the pair of fish that became the official emblem of Awadh is delved into; Shia beliefs and history, the Persian origins, changing languages, and several others form a segment of Chehel Pehel. To complete the picture, five chapters, titled, ‘People’s Magazine’, provoke and evoke the interest of the reader. As the author asserts, ‘This is about the wonderful men and women who once lived in our city all getting together regardless of rank or religion, for picnics and feasts; mushairas, melas and theatre productions; or enjoying an evening’s carriage-ride along our Gomti’s banks.’ The rest of the book is like an addendum to complete the fantastic story.

Legend of the pair of Fish and Machhi Bhavan—a fort like structure with 26 arches with a pair of fish on each, which almost two centuries later became the palace of Nawab Asaf-ud-Daula—is a ‘Persian legend about a sacred tree that grows in water, and to protect it from a wicked lizard two heroic fish guard it day and night.’ Till today, the pair of fish is an integral part of the State emblem of the Government of Uttar Pradesh.