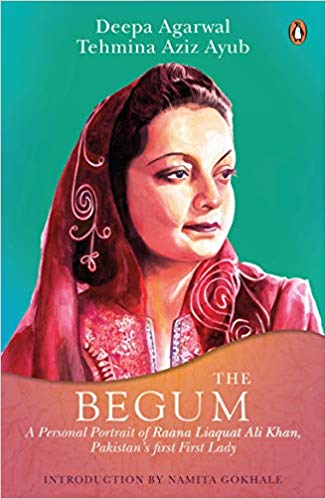 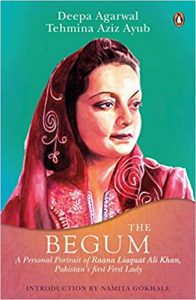 The Begum is a captivating, invigorating biography of a glamorous, gutsy, spunky woman born as Irene Margaret Pant in Kumaon in early twentieth century. Intellectual, scholarly and a woman full of pluck and fortitude, she taught Economics at Indraprastha College for Women, University of Delhi in the 1930s. It was during her stint at Indraprastha College that she met Nawabzada Liaquat Ali Khan, a member of the Muslim League, later to become the first Prime Minister of Pakistan. She married him in April 1933, converted to Islam, adopted the name Gul-i-Ra’ana and came to be known as Begum Ra’ana Liaquat Ali Khan, recognized and honoured as Madar-e-Pakistan or ‘Mother of Pakistan’. Ardently supportive of her husband’s politics, she left with him and her two sons for Pakistan in August 1947. In 1951 notwithstanding the assassination of Liaquat Ali Khan, she continued to be an activist and stood firmly for the cause of women’s empowerment in Pakistan. She was the first woman diplomat of Pakistan and the first and only woman Governor of Sindh. She encountered opposition at times for her resolute voice against religious conservatism, growing political corruption in Pakistan and her fearless criticism of what went wrong after 1947. But she remained undaunted and indefatigable—a spirit that she may have imbibed from Indraprastha College, a hub of strong women activists and the freedom struggle—till her death on 13 June 1990. Her legacy continues with All Pakistan Women’s Association (APWA) of which she was the founder.

Begum Ra’ana’s  fascinating portrayal  delineates her 86 year old life in two symmetrical parts, starkly different though. Subverting borders, it indeed, as Namita Gokhale writes in the Introduction, rescues from history the story of a woman who belonged to the subcontinent, both to India and Pakistan. It is representative of the major tropes of the Indian subcontinent’s recent history. Born a Christian in the family of Hindus of Brahmin origin (when her grandfather Taradutt Pant converted to Christianity in 1871, he was ostracized and disowned by relatives) and later converted to Islam, Begum Ra’ana’s life showed the impact of diverse cultures and values. Deepa Agarwal situates the narration in the caste-kin network of the time, local society of Almora, the freedom struggle and the chasm that Partition had brought. She explores the first forty-three years of Begum Ra’ana’s life—her birth, her childhood, her natal family, and her personal and professional life—on the basis of family documents (her father had written a brief account of her life, carefully preserved by his grandson) and some papers from the Museum and Archives Learning Centre of Indraprastha College. Tehmina Aziz Ayub traces the vision, public life and activism of the Begum in Pakistan and her indomitable spirit after the assassination of her husband. The Introduction and Afterword written by Namita Gokhale and Laila Haroon Sarfaraz respectively are succinct, sensitive and perceptive with a personal touch that stimulates the reader even more and urges us to read on.

The book is a narration of two contradictory, incompatible, conflicting yet conjoined identities of Begum Ra’ana and her prescient feminism across borders. Her life remains an enigma and a reminder of the unfathomable distance between nations and peoples evident from that she could never easily and casually meet her close-knit family in Almora again though its memory always haunted her. She, of course, visited India a few times.  Agarwal writes that when she visited New Delhi in 1978, she expressed her concern for the women of her village and confessed to her nephew that she missed the food that she once relished. Significantly, in a telegram to her brother, she wrote, ‘I miss Almora.’ The sentiments of her family and that of her village in India were complex—they were caring towards her and proud that she was married to the first Prime Minister of Pakistan, yet their emotions remained diluted. Her father, Daniel Pant, despite his cosmopolitan outlook had opposed her marriage to Liaquat Ali Khan, regardless of his wealth and property. What perhaps upset him was that his brilliant daughter would be the second wife of a Muslim man ten years her senior. Agarwal resurrects his emotions when he was told about Liaquat Ali Khan’s assassination. ‘Daniel brushed away a tear almost angrily…he flung up his arms helplessly’ and retorted, “I never wanted her to marry him. Or to go so far away in such troubled times. But she had made up her mind.”’ Begum Ra’ana was aware of the profound estrangement but probably had no regrets. She is quoted as saying in the later years of her life when she was in the wheelchair, ‘I have been a political mystery all my life’ and ‘I would do it all over again, ten times over.’

Whatever it is, her magnetic personality had cast a spell in Pakistan and left a mark on whatever she did. Laila Haroon Sarfaraz in the Afterword describes Begum Ra’ana as a warm-hearted woman, a strategist, with the grit of a true pioneer and a role model. Sarfaraz, on assuming office as the President of APWA, acknowledged that the Begum was actually an icon. The issues close to the Begum’s heart that displayed her idealism and also pragmatism and inclusivity were empathy with linguistic identity, her concern for the visually impaired, development projects like housing communities, hostels for working women, beautician training courses and above all the Human Rights Society of Pakistan. Influenced by her upbringing and education in India, Begum Ra’ana emerged a tireless crusader of women’s education, empowerment and emancipation in Pakistan, critical of purdah and illiteracy amongst women there. In her interview to Herald, Pakistan in 1984, she urged that ‘…no girl should get married until she has a profession.’ An exceptional, generous, large-hearted woman, Irene-Ra’ana believed, as Agarwal writes, in making the world a better place rather than the pursuit of one’s own happiness.

An achiever in both school and college, Irene-Ra’ana led an active student life. During her stay in Isabella Thoburn College and Lucknow University, she was intensely stirred by the political events. It was at the debate concerning the Simon Commission in the UP Legislative Assembly that she was attracted towards Liaquat Ali Khan. He was elected to the UP Legislative Council as an independent candidate in 1926 from Muzaffarnagar, a reserved seat for Muslims. Already a hero to the young students of Lucknow University, his fiery speech in the assembly that won the vote against the Simon Commission made a lasting impression on Irene Pant, heralding her romance and marriage with him. On completing BT (Bachelor of Teaching), she briefly taught at Gokhale Memorial School, Calcutta before joining Indraprastha College for Women in October, 1930. She resigned from the College after a year and a half to marry Liaquat Ali Khan. Inter-caste and inter-community marriages were a rarity then. Her family and society in general were opposed to it. Her wedding reception at Maidens Hotel, Delhi on 16 April 1933 was attended by the elite of Delhi but from her side, the lone guest was Kay Miles, her closest friend from school, who affectionately called Irene-Ra’ana ‘a dynamo in silk’ and wrote a biography of the Begum titled the same. Post-marriage Begum Ra’ana became her husband’s full-time political partner. Her involvement in the freedom struggle in India and relief and rehabilitation activities in Pakistan after Partition speaks of her tenacity.

The book is a lesson in history, of how it is shaped by individuals, unintentional acts and coincidences of their lives. It is a reminder of common real human stories and the connectivity between India and Pakistan, the common language, culture, history and memories that the two countries share and yet the division between the two nations intensifies almost every day. This biography of a remarkable, exceptional woman is a reminder of the conjoined histories of the two nations. Her extraordinary strength, steel, compassion, courage, commitment, determination, generosity, unstinted love, and much more leaves one  spellbound.

It may not be inappropriate to end with the lines: