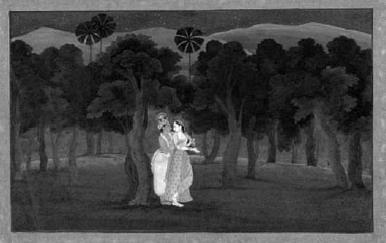 In the intense heat of the Indian summer of 1739, a Persian army could be seen heading in triumph away from the looted city of Delhi. Delhi was the capital of the great Mughals, the Muslim dynasty, originally of Central Asian origin, that had ruled much of India since the mid-sixteenth century. As the Persian army made its way homeward through the Punjab, it carried away with it piles of treasures gathered from across India by many generations of At the head of the column rode Nader Shah. Nader was the son of a nomadic shepherd from the Iranian–Afghan borderlands of Khurasan. He had risen rapidly owing to his remarkable military talents. In 1732 he had seized the Persian throne. Seven years later, in the spring of 1739, he invaded Afghanistan, then descended the Khyber Pass into India. At Kurnal, north of Delhi, he defeated three merged Mughal armies—around a million men—with a force of only 150,000 musketeers.

Nader Shah lured the old-fashioned Mughal cavalry into making a massed frontal charge. As they neared the Persians, his light cavalry then parted like a curtain, leaving the Mughals facing a long line of mounted musketeers, each of whom was armed with the latest in eighteenth-century weaponry: armor-penetrating, horse-mounted swivel guns. They fired at point-blank range. Within a few minutes, the flower of Mughal chivalry lay dead on the ground. Then the Persians moved into Delhi and began to systematically strip it of its vast riches: ‘Now commenced the work of spoliation, watered by the tears of the people,’ wrote a Delhi courtier a fortnight later. ‘Whole families were ruined. Many swallowed poison, and others ended their days with the stab of a knife…. In short the accumulated wealth of centuries changed masters in a moment.’