The All-Seeing Eye of the Mole 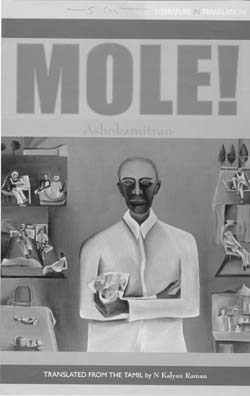 “It took me more than ten years to give shape to this work of fiction ….. The nearest form to this narration (which is somewhat new to Tamil letters) is the novel. It has a hero, a scene of action (United States), a period (1973-74)” says Ashokamitran (AM from now on) in his brief introduction to the Tamil original of this work. Ostensibly a travelogue of his some seven months stay at the University of Iowa as a writer in residence that the US government had sponsored as part of its strategy to win Third World intellectual support for itself in the Cold War days, it defies classification as a genre. How much of the book is factual and how much fictional is left tantalizingly in doubt. Actually, this kind of indeterminate genre is becoming increasingly common these days and there is even a name for it: “Faction”. AM is in good company. The work alternates between routine reportage of the quotidian tooings and froings of the eminent writers in different Third World languages taking part in the programme and the low key tensions in relationships among them. The authenticity of these events is deliberately left ambiguous. Mole! has all the seductive attributes so familiar to readers of AM. An engaging stance of self-deprecating diffidence in authorial interventions; an air of naivete in the narrative manner barely hiding shrewdly observed quirks of character and oddities of the ambience; a “stream of consciousness” narrative mode of cumulative details and submerged humour emerging into throwaway lines are the hallmarks of AM’s fictional writing.