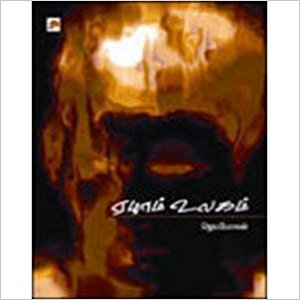 The nineties of the last century saw a second wind of creativity in Tamil writing, particularly fiction. Largely unnoticed by the readers of the pulp magazines that sold in thousands, a new crop of writers were exploring new themes and new areas of experience in little magazines and original work published as books.  Apart from the works of already established writers like Jeyamohan, Ramesh Prem, M.G. Suresh and Imaiyam (to mention only a few) who continued to produce significant works, younger writers such as Uma Maheswari, Salma, Joseph produced their first novels that were immediately recognized as important works.

As a sample of the new fiction in Tamil, I shall discuss in what follows the latest work Ezhaam Ulagam by Jeyamohan. Jeyamohan is no easy read and calls for close reading. Every novel of his is innovative in its ambience and perspective and experimental in its narrative style and characterization. But running through them all is a profound sense of humanity.  For example, in Vishnupuram, life in all its variegated aspects, the noble and the ignoble, across centuries, is presented in all their denseness. And it is pulsating life at its best and its worst. In Pinthodarum Nizhalin Kural (The voice of the shadow that follows) deals with the violence that is embedded in all that we do in pursuit of the best and ideologies.

Ezham Ulagam thematically quite different from Jeyamohan’s earlier novels. Recalling the seventh world in our puranic literature world that he presents here in all its horrendous detail is the world of commerce in human deformity, some of it deliberately inflicted by the entrepreneurs in this nefarious trade. In Jeyamohan’s grimly ironic portraiture, this world has all the characteristics of the world of commerce with which we are all familiar—the same money-grabbing avarice with least regard to human feeling or compassion. Children, old men, women all are the stock-and-trade of these entrepreneurs.

Unlike the puranic seventh world, Jeyamohan’s is here-and-now and right in the midst of the dark areas of the world we live in. It is the underworld of cheats and swindlers, of liars, murderers and rapists. Its denizens will readily lie for just a rupee without any shame or hesitation.  Murders are a regular occurrence. These men will buy and sell handicapped children, mutilate healthy ones, as if they were goats and chicken in a village bazaar. Human life is a commodity that is available in the marketplace.  Those who buy them regularly take them to temples during festivals and make them beg.  At the end of the day,  the money thus earned is turned over to their masters who deposit them in their bank accounts. The whole sequence of transactions is narrated in a deadpan realistic style.

Money is power is the underlying theme of this novel. The centrality of money in our lives has been repeatedly underlined in folk wisdom though the ages and more formally by poets and sages. The great sage Tiruvalluvar wrote that there is no place in heaven for people who do not have mercy and there is no place on earth for people who don’t have money. As Ramappan, one of the characters in the novel, puts it, the stomach has to be filled and we need money for it and there are many ways of earning it. Pothivelu Pandaram, the protagonist of this novel,  runs a begging business through handicapped human beings of all ages and sizes and shapes from small infants to old women. He diligently collects information about prospective “employees” of this kind. His experience in this line is amazing.  He transports physically ruined beggars in a lorry from one temple to another during the peak seasons and earns a lot of money through them. He “manages” the police and locally influential people. He exchanges his beggars with his opposite numbers in other groups without any compunction. The whole thing is run like any big business. However, his personal life is like that of any respectable bourgeois. He has to face many a crisis like any middle-class householder. Marrying off his daughters, for example, is one such problem. Money, whichever way it is earned,  comes in useful for increasing his personal amenities. He has to think of acquiring house property and jewellery for his children. Except for the fact that his profession is an unorthodox one, he is like any other money grubbing middle-class upwardly mobile individual. This is what makes it difficult for the reader to be censorious about his activities. His is only one way among many of earning money. Thus do we have a critique of money playing such a central part in the lives of every one in this world? Despite much hypocritical scorn and contempt for money unctuously expressed in our ethical literature, in practice the world does not move without money.

The novel opens with a scene in which the physically ruined Muthamma is about to deliver her eighteenth baby. A village girl is taking care of it. Pothivelu Pandaram is in great tension. Even when his own wife was hospitalized for delivery, he did not have this much tension. It is not just another delivery.  He had arranged for a physically ruined man to have sex with Muthamma, expecting a handicapped baby.  While waiting for the event, he is constantly praying that the baby be handicapped. A deformed baby is a capital asset for him from which he can make money.

Unfortunately, on this occasion, Muthamma realizes intuitively that it is her own son she is about to have sex with. The hue and cry she raises is of no avail and she has to go through with it. Pandaram is stubborn in seeing the sexual encounter through. This incident sets the tone of the novel’s theme. At the end of novel, there is another incident in which a girl runs away with her lover on the eve of her arranged marriage with someone else. This lover abandons her and she turns a prostitute in an unknown city. There are innumerable such incidents that link the basic theme. It is interesting to compile the activities of the women characters of the novel. Erukku is one of the female beggars of Pandaram’s group. One day, she is taken to the police station and raped by the policemen there.  Later she is admitted to the hospital. In order to get her released, Perumal, an agent, claims that she is his wife and to establish this lie, he ties a yellow thread as thali around her neck. He manages to bring her out of hospital. Though the whole thing was play acting only to arrange her redemption from the hands of police, the girl herself starts thinking that he is indeed her real husband. He is infuriated and beats her up regularly and she lives through it all.   Vadivammai is the beloved daughter of Pandaram. When her lover abandons her in an unknown city and she turns a prostitute she accepts this situation and there is no complaint in her heart against the man who did all this to her. Though Pandaram’s wife had long stopped having sex with him, she has no complaints about the way he runs the begging business through the handicapped and physically ruined people. To her it is just another way of making money. Her respect for her husband does not diminish in her heart. All these three characters are from different strata of society but their attitudes are the same. This is a stark commentary on Indian women’s attitude to their husbands.

To sum up, this is a novel with many layers of meaning and deserves to be considered as one of the major events in Tamil letters of the last decade.