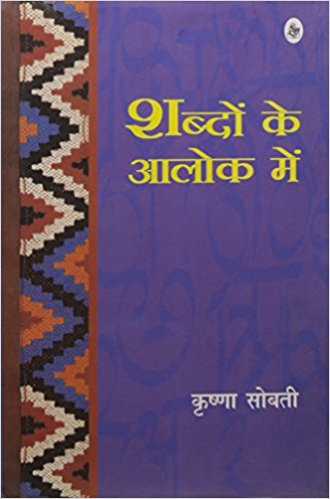 Krishna Sobti’s Shabdon Ke Aalok Mein is a book of miscellany that evolves as a continuous narrative of her ever-evolving personality—both as a writer and as an individual. Woven around memory and nostalgia, travel fragments and everyday associations, dialogic-monologues and interviews, creative-critical reflections/impressions and academic interactions, this narrative tends to foreground Sobti the woman, her milieu and some of the literary moments she has lived through in the near past. As such, it not only becomes a socio-literary index of her oeuvre—and one tends to approach the book with the same expectation, i.e. to discover a key to Sobti’s literary corpus—but also an introspective chronicle of her life and times.

In its meshing of the content and the form, this narrative is vintage Sobti. Its linguistic density and stylistic dexterity admirably captures the complex burden of her memory and brings to the fore the nuances of her thought processes. For Sobti, ‘word’ is a sacred entity and when employed with care and reverence it has the power to fuse the inner and the outer, the self and the surroundings, nature and culture, the said and the unsaid, the seen and the unseen into a communicative and cognitive whole.

Literature is an eternal process of mastering and organizing the word in a way that not only captures ‘life’ to create a cumulative ‘text’ of socio-human significance, but also, via this text, creates a dynamic dialogue between the past and the future, then and now, desi and marga, author and reader, time and space to reveal the ‘truth of life.’ Krishna Sobti’s literary ethos comes out as a unique blend of authorial integrity and independence and she guards it fiercely. She steers clear of the art-for-art and art-for-life binary and all politico-literary sloganeering or superficial ‘isms’. The form and content are significant not in their autonomy but in the way they are bound together by the authenticity of the idiom and the honesty of the associative sensibility of the author. It is the combined expression of the inner churning of the mind/consciousness and the external reality. Rather than looking at truth/life, the ‘word’ in her becomes a medium to look into truth/life. A deep empathy for her characters and their locations, an organic evolution of their life trajectories, the socio-psychological configuration of human relationships—all these get distilled through a process of dense reflection and commensurate expression: “Meditation is the soul of literature and language is its body.” The ordinariness of everyday life, with all its contradictions, is thus rendered extraordinary by the strict discipline of the ‘word culture’ that engulfs Sobti within and without.

It is via her problematization of expression and language, and objectivity in writing that one gets to the core of her literary praxis. That which on the face of it seems to be contradictory, on deeper reflection emerges as nuanced and inclusive enunciations on creation, creativity and life. Sobti illustrates through inclusions, through associations and through complexity of awareness. It is this aspect of her reflective ethos that makes her writing tantalizingly nuanced and rich experience.

Sobti’s associative sensibility as a writer is further supplemented by a deep sensitivity to/of her expressive idiom, i.e., Hindi. It is her romance with this language that imparts individuality and depth to her works and gives them an authentic touch. Hers is not a “superficial relationship with language and words” as she is “forever absorbing the kinship of words, the stability of words, the meanings that echo in words . . . A writer showers with equal love the costume, the body and soul of words.”

The very ambience of Shadon Ke Aalok Mein is imbued with a distinct reflective-meditative aura. While it is the sylvan sojourn of Summer Hill in Shimla that provides the trigger for her reflections, it is her address to Sarvar that helps her give form to her experiential-intellectual meanderings and provides this book with its structure. Sarvar thus becomes a narrative-reflective catalyst so essential to Sobti’s ever-spiralling literary credo. As an extension of Hashmat (a virtual-self of Sobti in Hum Hashmat) generic cialis 20mg best buy Sarvar enables the author to dig deep inside and confront herself, and as a distinct other, she helps the author in Sobti to understand the world outside, both for herself and for the audience/reader. And in the process Sobti is able to strike a narrative/communicative balance wherein creation and creativity run parallel to the creator, and springs from the common ground between the two. The anxiety to create and communicate meaning through ‘the aura of words’ is further supplemented by the way each ‘section’ of the book is organized. The central reflective piece of each section is sought to be illustrated through concrete reminiscences, random interviews, literary citations and an evocative address to Sarvar or the prospective reader. Such a narrative mesh creates an aura of perspectival commonality-in-plurality spanning time and space and makes this text a composite and cumulative statement of word-culture that, transcending national and linguistic boundaries through an avowal of converging literary sensibilities in divergent locations, builds up the possibilities for a world-culture. Within this cultural corpus Polish poetry jostles with Katyayani’s poetic protests and both with Nazir’s nazm to complete a reminiscental point of view; Liladhar Jagudi’s poetry caps Sobti’s literary agenda for Indian writers; and an Argentinian and Portugese poetic sensibility enhances one’s appreciation of the Himalayas.

Shabdon Ke Aalok Mein contains four interviews that form an important constituent of its narrative. Though each one of these is marked by a distinct thematic emphasis and personal preferences of the interviewer, yet, when read together, these, apart from recapitulating the salient aspects of Sobti’s literary vision, not only lays bare her anxieties as a writer in times of intellectual and emotional violence—the Partition politics and its aftermath then and the ‘commodifying’ onslaught of communal politics and globalization now—but also provides one with a blueprint to survive such crises. Sobti distinguishes between ‘ideology’ and ‘culture of ideas’ and posits the latter as the domain of literature. It is this word-culture, this propensity to understand life in its inclusiveness that helped her transcend and negotiate the trauma of the immediate and strike an affirmative equilibrium between memory and forgetting, the felt and the thought despite the immediacy of the event, i.e. Partition. Unlike politics, history or religion, literature is the domain of the undivided and indivisible, an indestructible repository of human faith and values. Though fully aware of the political, it is not a purveyor of politics. As such, Sobti is pained by the political division of Literature into literatures—woman literature, dalit literature, etc. Despite all their empowering and interventionist potentials, such divisions tend to undermine the wholeness of the word/world and transforms ‘literariness’ into a designer product up for grabs in this mass and market mediated political economy.

Sobti’s meditations on the evolution of India as a nation-state, its literary, cultural and intellectual capital, environment and nature—yet another remarkable aspect of this miscellany —spring from and unfold within the conceptual framework of her sophisticated ‘word-culture.’ A strong autobiographical streak marks all her literary and non-literary meditations and imparts the narrative of Shabdon Ke Aalok Mein with a confessional aura. This results in an immediate bonding of the reader with the writer.

Though the book contains much with which the Sobti initiate is already familiar—for example some of the interviews and ‘literary-statements’ compiled in this book have already appeared elsewhere—yet for Sobti aficcionados it provides another opportunity to ‘interact’ with the various facets of her personality within a single cover in Hindi. A peep into her childhood, her everyday life routine and her emotional-intellectual associations with literary and academic personalities like Trilochan, Bhishm Sahani and Jaidev come as an added bonus. And the photographs appended at the end of this book strongly ground the whole narrative in the real/lived.