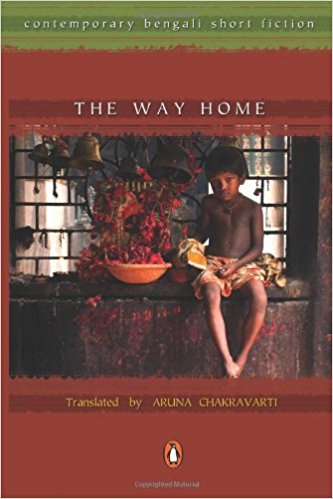 Readers of short fiction will be happy to welcome this new anthology. I enjoyed reading the stories as they are well selected and translated. Writers range from the end of the nineteenth (Rajsekhar Basu, 1880) to the middle of the nineteenth century (Suchitra Bhattacharya, 1950) and include some of the best-known artists of the Bangla language. Let me begin by quoting from the two writers I have just mentioned; Chakravarti translates Rajsekhar Basu’s ‘Anandibai’ with utmost ease: Trikramdas Karorhi was a little over fifty with a marital career graph that was strange—to say the least. Like most other men he had had one wife till only two years ago. She had died, suddenly, leaving him inconsolable and encumbered, besides, with the responsibility of half a dozen children. Unable to bear the burden of her loss, he had married Anandibai three months after the tragic event and then two others in rapid succession. He had, however, kept the fact of his last two marital ventures carefully hidden from friends, relatives and Anandi. (p. 3)

This language is easily “accessible” to the contemporary reader; in many ways, Rajsekhar Basu’s appeal to his contemporary audience has been ably converted into the present world. This could also be looked upon as a sacrifice of the specificity of the story, the world that it portrayed and the characters that it embodied.

One could launch into an academic discussion about the “value” of readability, but there is no doubt about the fact that to the contemporary reader, it is undoubtedly “accessible” as a text. Look at this section from Suchitra Bhattacharya”s story ‘Shikha’s Address’, and the point would be clear: Shikha took out a handkerchief from her vanity case and mopped her steaming face. She moved the shopping bag from her right hand to her left. It was a late afternoon in mid-April and very, very hot. The sun seemed to be raging and fuming out of a sky as white and clear as glass. Huddling in the faint streak of shade on the footpath she walked a few more steps. (p. 262)

The translation throughout the book is done for a very “contemporary” audience, and the language is absolutely current. The idea that each age has its own reading and its own translations comes out clearly in Aparna Chakravarti’s rendering.

Actually, Rajsekhar Basu’s ‘Anandibai’ is a good translation and holds the humour of the story quite efficiently. Bhibuti Bhushan Bandopadhyay’s ‘Aniseed Flower’ is an excellent translation of a very famous story. I am not sure what ‘aniseed’ signifies to the western world, it is a rather neglected and rarely used spice there whereas to us it brings to mind a host of flavours and connotations that are associa- ted with ‘mouri’ or aniseed. The selection of writers is of course absolutely canonical, and you have the names of the major artists with the addition of two women at the end. Bani Basu and Suchitra Bhattacharya are my favourites too, and I am happy they are here. But surely there were women writers a little earlier, or are we supposed to read the dominant canon only?

I should admit here that, in spite of the good translation work of Aruna Chakravarti, I felt deeply disturbed by several matters that the publisher has done in this case. The cover is a beautiful picture of a makeshift temple of the goddess Kali with hibiscus strewn over the black face of the deity, a little village boy sitting next to this deity. The name of the book The Way Home—is taken from the name of a translated story of Sirshendu Mukhopadhyay in the collection. What is this book about? On the top of the cover page is printed: “Contemporary Bengali Short Fiction”, and at the bottom, “Edited by Aruna Chakravarti”.

I am unable to find any reason as to why Aruna Chakravarti would “edit” what she has chosen to translate.

Penguin actually seems to erase the role of the translator; she is hidden behind the “editor’s” façade, she never claims any identity for the person who is actually rendering the Bengali texts into English. In fact, you would not have known that she has translated these stories if you did not read the “Introduction” or the small print at the back of the book. The Introduction is all about Chakravarti’s experiences and understanding about the act of “translation” and she makes claims that sound very odd in a book where she is an ‘editor’ at the most! The assumptions that underlie this Introduction are dated, the notion of our cultures being “provincial” and English being “powerful” and “international” proceed from a very subservient attitude towards the global dominance of a hegemonic language. The Introduction appears to be pleading for the consideration of “local” or “regional” cultures by the “international” and the “powerful” of the world. This is disturbing; I thought that we had outgrown our intention to serve our goods to the English-speaking world just because we want them to consider our existence on this part of the planet; I thought that our identity did not depend on the acknowledgement of the so-called international or the cosmopolitan. Aruna Chakravarti says as a translator she “cherishes a dream of finding an ideal language—a common language that all mankind can share.” Is that why we are so keen on translating our literatures into English? How can “mankind” share one language when cultures are existent on the very uniqueness of languages? A larger question is, who is her audience for this anthology of short fiction for an understanding of what “translation” aspires to do?

Interestingly, this is the only place where it becomes clear that she is not only doing the translations of the texts, but also choosing what she translates. Is this essay for scholars in the area of translation studies? Then surely it has to refer to a host of research that discusses these issues in the discipline. It should have been a “Translator’s Introduction” where she talks about her own experiences and not a pronouncement on the area.

Penguin has some responsibility as a publisher in India; they have to acknowledge the translator and the existence of the “original” as primary agents in the process of translation from Bengali into English.

Mahasweta Sengupta teaches at the Central Institute of English and Foreign Languages in Hyderabad.