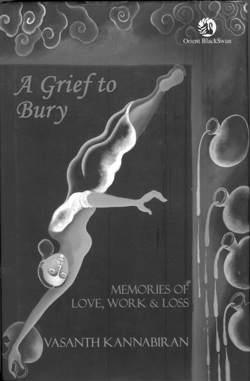 A Grief to Bury: Memories of Love, Work and Loss is a series of conversations with twelve Indian women who reflect upon the internal dynamics of their long enduring relationship with their spouses. They also share their individual coping strategies at the traumatic loss of their loved one, either suddenly or after a prolonged illness. Vasanth Kannabiran’s subjects have an established identity in the public sphere—be it social activism, academics, the fine arts or literature. As Kannabiran suggests, these women who were born before Independence and come from a common class background, share ‘a commonality of values’ derived from the nationalist period. Their life-narratives indicate a socialist orientation, as well as strong feminist ethics.

In her preface, Kannabiran explains that the motivating factor behind her project was the fear of loss of her own husband, K.G. Kannabiran, a human rights barrister who lived his life in the shadow of violence. She posits the central question: ‘How does one come to terms with the loss of companion after decades of married life together?’ When two people have shared a lifetime together, how does a wife in an inherently patriarchal set up deal with the fear of ‘impending loss, and the loss itself’. Kannabiran sets out to understand how women, after widowhood, come to terms with ‘their altered, often fractured, sense of self’ (p. ix).

She explains: My purpose here is not to sing a paean to matrimony. I sought through these conversations to resolve the contradiction between my firm feminist conviction that marriage as an institution primarily disables and inhabits the independence and growth of women with women examples of marriage, including my own, that contradicts the assumptions and dimensions that reach far beyond the hearth and home (p. xiv).

The book is divided into four sections based upon the professions of her subjects. Section one titled ‘Choosing the Rugged Path: Charting the Political Economy of Gender’ focuses on three stalwart feminists who have played a crucial role in the institutionalization of gender studies—Neera Desai, K. Saradamoni, and Rameswari Varma. In section two ‘Made for each other: Welding Human Rights into Development’, we gain insights into the life narratives of social and human rights activists Kathy Sreedhar, Koely Roy and Ela Bhatt. For those in academics and connected with literature, section three, ‘Portraits of Marriage: Wielding Pens, Forging Wisdom’ offers an engaging account of the married lives of Meenakshi Mukherjee, Shanta Rameshwar Rao and Abburi Chaya Devi. The last section ‘Home and the World: The walls of Freedom’ introduces us to the perhaps lesser known public figures of Sutapa Chakrabarty (Vice-President of Human Rights Law Network), Rukmini Parthasarthy (Tamil literature) and Jayalakshmi Narayan ( a leading expert of Bharatnatyam who was the first woman who toured the world as a ‘natttuvanar’).

Kannabiran has shared a close familiarity with most of the women whom she engages with, and so she is able to draw out personal details of the years of shared intimacy, as well as the tussle to achieve a delicate balance between the private and the public spheres. What emerges from these accounts is an insight into the complexities of marriage in both conventional and unconventional relationships. To cite some instances: Neeraben Desai shares certain undercurrents that affected her long marriage of forty-six years to Akshaya Desai, until the couple eventually came to a ‘delicate core of understanding’ (p. 9); Shanta Rameshwar Rao describes the physical abuse at the hands of her first husband, and the support and solace she found in her second marriage; Ela Bhatt was the daughter of a highcourt judge, but chose to marry Ramesh, a young student leader in 1947. He inspired her to a life of simplicity, imbibing Gandhian philosophy and ideology; Meenakshi Mukherjee married her teacher Sujit and describes how they negotiated a tender and caring relationship despite points on which they disagreed totally at times.

The epilogue is the most evocative section of the book. Vasanth Kannabiran presents her account of ‘half a century’ with her husband, K.G. Kannabiran, member of the Communist Party, human rights activist and lawyer. She explains: ‘given the perpetual presence of violent death in the human rights movement, the fear of loss has been a permanent guest in my household’ (p. ix). We partake in her pain as she describes the loss she experiences in the weeks after his death: The next couple of weeks were spent sorting out his clothes and reorganizing the house around his absence. It seemed so empty and there was so much place that I felt I could let it out. Did one quiet, frail man who spent most of his time either in front of his computer, or in the easy-chair under the tree reading, occupy so much space? Or did I create the clutter around him? (p. 37).

We are inspired by the first person accounts of women who have controlled their deep grief at the death of a loved one, and admire the strong face that they have presented to the world unlike ‘traditional Indian widow broken by destiny’ (p. xviii). And yet at the same time, the narratives in A Grief to Bury sadden us, for they constantly remind those of us in relationships of a deep-seated inner fear, that after all partnerships are transient and ‘that one of us is going to go’ (p. 27).

The collection could have done with tighter editing to sustain the interest of readers who at times have to plod through much repetition, and an excess of personal details not of much concern interest to a larger readership. A uniformity of the presentation of the interviews in terms of length and format would also have made the collection more reader friendly.