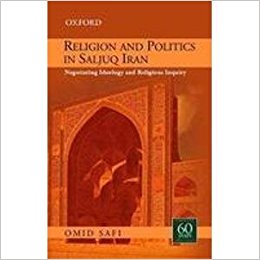 A lot has been written and discussed about the linkage between religion and politics. The Iranian Revolution of the late 1970s in a way epitomized such a relationship. Omid Safi, who grew up in Iran during the revolutionary days and whose family later shifted to the United States, looks at the ideological and political aspects of Islam in the Saljuq era Iran of the eleventh and twelfth centuries. ‘If the events of 1979 (and the subsequent exile/migration) had proven too traumatic to allow for a critical study, I sought to study some of the same dynamics in the distant world of the Saljuqs’, says Safi.

The field of historical studies of the Saljuqs is still relatively underdeveloped. There is a dearth of full-fledged writings of the era that throws light on the linkage between varied strands of Islam and their linkage with the politics of those times. There is also the received notion that Sufism is primarily mysticism. It is important to study its ideological functions and linkages to power. As this book testifies, the ‘baraka’ the Sufis bestowed on the Saljuq sultans enabled the latter to legitimate their power.

Safi brings forth the interaction between the Saljuqs and the Sufis in such a manner that the political and ideological realms of premodern Muslim societies are understood with newer insights. He is critical of those modernist perceptions that limit our understanding of premodern Islam. ‘Shockingly, it seems that the premodern Islamic discourse on the sacred at times was capable of allowing for a much wider spectrum of interpretation than much modern scholarship’. According to the author, this book ‘aims to affirm and document the multiethnic, multilinguistic, and intellectually pluralistic nature of premodern Islam’.