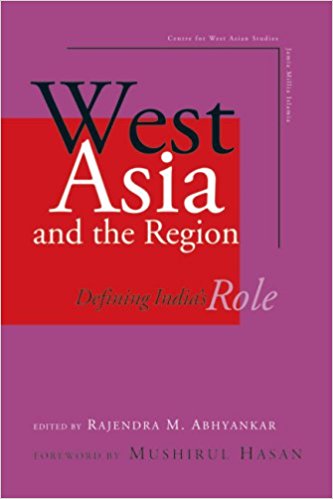 The Centre for West Asian Studies was set up in the Jamia Millia Islamia in 2005. The Director of the Centre, Rajendra M. Abhyankar, has pointed out in his ‘Introduction’ that the Centre’s area of study is much larger than West Asia, and includes the Horn of Africa, Central Asia, Iran and Turkey. The Centre organized a ‘National Conference on West Asia: Defining India’s Role’ in August 2006 and the book under review contains the 40 papers presented then.

In his ‘Foreword’, Mushirul Hasan argues that ‘Indo-US interests have been non-congruent both in general and within our region from Palestine to Afghanistan and even Pakistan.’ The US with its actions today is the ‘single reason for instability and insecurity in our region’ (italics added).

Hamid Ansari’s paper is titled ‘West Asia: The Imperative to Comprehend the Direction of Change.’ Scenario building can only begin with undeniable facts. Among the nine such facts listed, he starts by drawing attention to an estimate made by the International Energy Agency in its World Energy Outlook 2005. By 2030 MENA’s (West Asia–North Africa) share of global oil production would be 44% and of gas 25%; the energy import dependency ratio of OECD countries and of developing Asian countries will be considerably higher (88% for India); the region would have surplus liquidity for investment at home and abroad on an unprecedented scale. The reviewer finds it of some interest to read all this towards the end of 2008 when given the crisis in the global economy the West, the IMF, and major developing countries including India, are vigorously chasing the sovereign investment funds from West Asia. On Iraq the advice is for the US ‘to announce plans for an early withdrawal, develop an approach in cooperation with Iraq’s immediate neighbors, and thereby give Iraqis a chance to focus on their future than on their present’. Ansari anticipated the newly elected President Barack Obama with singular precision. Turning to India’s interests—incidentally, it might be noted, en passant, that Ansari never talks about India’s role—he speaks of the ‘continuing need for evolving a distinctly Indian policy approach that would present India as a resourceful, powerful but benign neighbor to the states of the region.’ Ranjit Gupta in his well researched paper on ‘China and West Asia’, argues that China has been the ‘biggest beneficiary of the events of 9/11, apart from its closest global ally, Pakistan.’ Till 9/11, the US under Bush was focusing on meeting the threat from ‘a rising China’. Post 9/11, the US was compelled to seek China’s cooperation on a number of issues. Till 1955 China did not have diplomatic relations with any country in the region except Israel. Gupta finds that China has made better use of its assets than India. ‘India’s views will start making an impact only when India is viewed as and behaves like a global power and has developed strong relations with influential countries in the region bilaterally to such an extent that they would feel compelled to take India’s views into account.’ Incidentally, none of the papers clearly tell us what India should do to be seen as a global power. The recent action by the Indian Navy against piracy near the Somali coast is a step in the right direction. We have reason to believe that the Indian Navy will strengthen its presence in the Gulf waters in the near future.