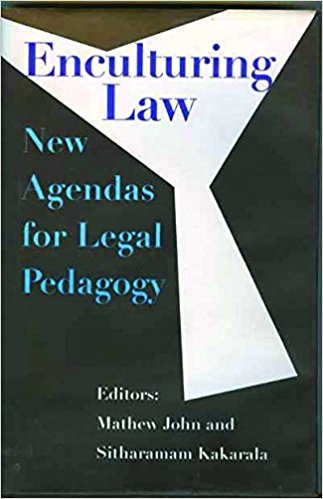 Books with their emphasis on an interdisciplinary approach to law in India are rare to come by, but rarer still is a book on the developments and challenges to legal education in the country today. Enculturing Law thus occupies a fairly unique niche in the booming law-related publishing segment. The book is an outcome of a seminar held in 2005 organized by the Centre for the Study of Culture and Society together with the National Law School of India University and the Alternative Law Forum in Bangalore. Leading scholars drawn from different backgrounds have contributed to this exceedingly rich collection. Several themes have been examined in this thought-provoking book. The extent that legal pedagogy in India has mirrored shifts in legal methodologies and legal thought in the Euro-American tradition is a recurring motif in several essays in this collection. Such a focus is certainly not misplaced, given the charge that Indian law continues to retain its colonial pedigree or as has been argued by many in current times,

that it is being consciously reformed or re-interpreted to suit the needs of liberalization, or else if it is legal education that has been transformed into a professional course to suit the interests of the litigating elite.

Various essays in the book, including the Introduction by the editors, challenge this notion of the autonomy of law. The positivist view that law can be understood from within the system has led to the pre-eminence of ‘black letter’ law within law schools, the domination of legal education by lawyers, judges and academics drawn from within the strict legal tradition, coupled with a reluctance to engage with the impact of the law on society at large that could act as a method of evaluating its legality and authority. Thus, Sitharamam Kakarala in his essay on the curricularization of human rights asks: ‘[S]hould the objective of human rights pedagogy be to produce professionally competent lawyers or to create sensible and knowledgeable citizens?’ (p. 73). Pointing to the near absence of critiques by human rights organization in law school teaching materials and styles, he also draws attention to the silence regarding the human rights movement and its praxis in the curriculum of human rights courses. He stresses the need to narrativize the history of human rights movements so as to provide materials that can enrich pedagogy. Yet the problem does not appear to be one of lack of such documentation or the lack of inclusion of such ‘praxis’ within the curriculum. The answer appears to lie deeper, in the absence of any tradition of asking hard, uncomfortable questions within the classroom, the tradition of not challenging the limits of the ‘law’ and thus the state, and in one sense, the conscious keeping out and de-politicization of legal pedagogy thereby creating a kind of legal education, that Baxi in his essay terms as being of the ‘Macaulay-type’.

Upendra Baxi in his opening essay on ‘Enculturing Law?’ takes issue with the approach that legal education in India has been excessively self-referential or unresponsive to historical transformations. Raising hard questions of whether, indeed, existing conceptions of legal pedagogy privilege the idea of law’s autonomy, he offers an alternate reading or version of ‘doing’ the history of legal education that reveals the manner in which dominant Anglo-American ways of doing law (that ignored the by-then burgeoning interest in critical legal studies or feminist critiques of the law) were received by the Indian academia, but of how this mimetic acceptance of either the common law or case law methods of doing law ‘transferred forms of law teaching into a form of “madness”, fetishizing understandings of law.’ (p. 8) that resulted in a blind love for these methods, i.e., a form of ‘case madness’. He is biting in his portrayal of how unquestioning acceptance of received forms of legal education dominated education in urban centres. He observes that what was truly indigenous to the Indian legal tradition, for example the use of law creatively in colonial times or the role played by the bar in crucial political struggles in our history since 1947, point to the need to requestion the construction of the history of legal education as mere passive acceptors of received wisdom. Baxi strongly refutes the notion of any single, linear method of capturing the diversity of traditions of Indian legal education, and points to examples that attempt to take legal pedagogy outside the confines of the given, proper forms of law teaching. (The role played by the curriculum development centre reports in law of which Professor Baxi was chairperson is dealt with in the Introduction by the editors). Professor Baxi points to the need to capture the political dimensions of legal curricular reform, including the setting up of the now-famous National Law Schools style legal education to understand how law stands culturally embedded and the underlying need to question whether legal education matters at all, and if so, for whom.

The understanding that legal systems are not homogenous and the standpoint epistemology determines one’s understanding of the law is brought out sharply in Roger Cotterrell’s essay where he notes that ‘Legal thought in national contexts is being fragmented from within in a new “jurisprudence of difference” and globalized from without by demands of transnational harmonization or uniformity’ (p. 26; footnotes omitted). While culture is used to understand the manner in which the law is shaped, culture is problematic because it is treated as a given. Could this be replaced by the notion of community, he asks? He argues that given the plural nature of societies today, a law and community approach may be a better tool to understand the role law could play in regulation.

The need for a continuous engagement between law and social science is the central theme of the second half of the book. The role played by the textual reading of law encouraged from colonial times and the manner in which this has dehistoricized Hindu law is effectively brought out in the essay by Dattathreya Subbanarasimha. Together with scholars like Werner Menski and Robert Lingat who have pointed to the distance between Anglo-Hindu law or shastric law on the one hand and lived social reality on the other, Subbanarasimha notes that legal scholarship in India needs to develop into becoming creators of knowledge based on local traditions rather than acting as conduits of colonially constructed knowledge.

Janaki Nair examines the similarities of history and law and the use of evidence by both disciplines to determine complex notions of intention, crime and justice. She uses a fresh re-reading of the case histories of the unique declaration of independence of Isoor in Karnataka during the civil disobedience movement and examines why the challenge to constitutional authority was so frightening and why both the colonial state and the nationalists dubbed this act of defiance as a momentary act of ‘madness’ in the civil disobedience movement. Using the Isoor trial as an instance, Nair notes how the judicial discourse denied agency to women who fought the state and reduced what was a political act of rebellion to one of momentary mindless violence that was interpreted and dealt with accordingly.

Tanika Sarkar too, in her essay, elaborates on how the encounter of colonialism with personal law in India resulted in women suffering from what she terms ‘double-negative teleology’. She shows us how the reformers against Sati had to navigate their arguments in a manner which did not disturb the pre-eminence given to shastric texts in determining the correctness or otherwise of Sati or widow remarriage, and how women’s patriarchal oppression was further reinforced with Victorian notions of gentility and domesticity. Yet her reading of the development of the Anglo-Hindu and Anglo-Muslim law shows the spaces they created for women. She challenges the belief that codification of personal laws resulted in ossification of these laws, anglicizing them in an alien manner. She points to the vigorous ways in which litigation was used by women, Muslim and Hindu, to bring about changes in domestic arrangements. Law then provided a site for critical questioning and restructuring of social arrangements. The manner in which the law continues to be a site for feminist engagement is brought out in sharp relief by Flavia Agnes in her essay on the dilemmas confronting her while litigating the bar girls’ case in Mumbai recently, and the manner in which the discourse around the case constructed binaries of morality versus livelihood, while deciding whether to permit dancing in bars. Her detailing of this case shows us how such questions led to divisions between groups of feminists and activists, how the discourse while legislating for a ban either demonized such women or denied them any agency, and the reasoning of the high court while upholding a constitutional right to dancing and striking down the ban.

Oliver Mendelsohn’s fascinating essay on ‘How Indian is Indian Law’ emphasizes the living nature of the dispute-settlement processes standing outside formal law and the insights this rich pluralism offers us about the nature of the Indian state and society, and the ability of communities to play a greater role in decision-making. He points to the nature of authority as distinct from legality in Indian thought to show us how a Westphalian-like, Austinian idea of an all encompassing state simply did not, and even now does not, resonate with the manner in which groups and communities are organized. It is this ‘pluralistic vigour’ that he offers us as a point of departure for understanding the limited manner in which India may be said to belong to the common law tradition.

Several essays in this book demonstrate the kind of interdisciplinary scholarship in the understanding of law that the organizers of the seminar pointed to and bemoaned the lack of. The book by combining such scholarship together while exploring the manner in which legal education could be further vitalized, serves as an important starting point for further research and writing. It offers us several possible entry points for combining the legal and social sciences, the strengths that such an approach brings to re-examining the nature of the Indian state and society today, and suggests possibilities for a fresh, exciting world of future scholarship.

Kamala Sankaran teaches at the Faculty of Law, University of Delhi.