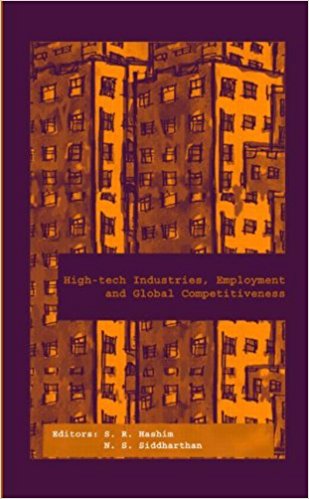 The volume is not as ambitious as the title appears to suggest. The introduction to the volume effectively narrows down the scope of the volume. There are firms in India and China who are emerging as global players in high-tech industries, and it is important to understand and analyse ‘the sources of their competitiveness, inter-country differences in their conduct and performance’. In the first section on Global Competitiveness, out of six articles, two are on Indian IT industry and one is a comparative study of China’s and India’s IT industry. Among other articles there is one on the pharmaceutical industry of China, one on sourcing and sales strategies of foreign subsidiaries of China, and another is on new technology initiatives of Mauritius. As we shall see, a common thread (a theoretical framework) connecting these articles is absent. The articles in the volume, therefore, hang loose, and many of the articles look like putting forward a trivial thesis or hypothesis. For example, Stanley Nollen and N.S. Siddharthan studied the software and hardware firms of India and China.

They have a hypothesis—one of 11—that holds electric power supply to be a distinguishing variable explaining the difference in performance of Indian and Chinese firms in both software and hardware industries. The statistical result did not find this very important. The authors’ explanation was that the Indian firms actually had in place a captive power backup system. I am sure that this is fairly common knowledge. The question arises as to why this is included as a variable at all. Infrastructure being an important bottleneck, the authors should have thought of more appropriate proxies. Similarly, although China is more active in technology-related variable (R&D and new product innovation), the statistical results did not support the hypothesis. The authors argue that the Chinese perhaps were doing more adaptive R&D. Is adaptive R&D an antithesis of competitiveness? An entire body of literature on ‘trunk innovation’, and ‘path dependence of innovation’ would have provided a set of more insightful variables. At another point the authors argue that Chinese labourers are more obedient and Indian ones are more independent and while the former suits the hardware industry and the latter is appropriate for software development. This is an important assertion that may sound funny in the absence of an appropriate theoretical foundation for the study. The article leaves an impression that it is more an exercise for testing the authors’ skill in using statistical packages than addressing a researchable issue.

Section II on employment has three articles and, unlike the earlier section, all of them deal with employment issues in the context of MNEs and high-tech industries. The regression analysis by B.L. Pandit and Siddharthan finds that in a liberalized Indian economy employment is likely to grow in activities involving high-tech and high skill, whereas the same is likely to be dull in industries devoid of infusion of high-tech requiring high skilled manpower. Atsushi Kato and Arup Mitra present a model that can be used for much deeper understanding of global competitiveness of Indian industries. It has been observed a long time back that any policy of gaining technological progress based on horizontal diffusion (import of capital) would enable at best the attainment of some ‘production capability’ and not ‘technological capability’(Bell, M. and K. Pavitt, 1993, ‘Technological Accumulation and Industrial Growth’, in Industrial and Corporate Change, Vol. 2). This is true even if there is rise in employment in the capital importing industry. Sandip Sarkar and Balwant Singh Mehta’s article on ‘Employment profile of the ICT sector’ provide critical information on the sector’s contribution to GDP, export and employment. It further elaborates on matters of job quality, educational profile of the employees, wages, and wage inequality in a sector that has a presence of large corporates, small independent firms, public sector and MNEs.

The third section on science and technology has contributions on India from two eminent scientists and a technologist from India. It is quite a struggle to discover the linking thread of this section with the preceding ones. Two articles in this section, however, make interesting general reading, though many readers may find them as appropriate features for weekly magazines as they are in the form of interviews with celebrity scientists.

The book is an outcome of a seminar on ‘Knowledge-based industries, employment and global competitiveness’ held in 2006, and organized by the Forum for Global Knowledge Sharing. The contributions and contributors of the articles show an interesting mix. The assortment of articles leaves an impression of lack of coherence in the planning of the book. Why Mauritius? Why only India and China? Is their respective global competitiveness defined by the competitiveness between them? Also, why only IT and pharma? What about emerging technological fields like bio-tech and nano-tech? Is it because these are what organizers could gather as contributions on this very important theme? Questions like this are generally expected to be addressed in the introduction to the volume. Instead the introduction, however, devotes most of the space to repetitive descriptions of the articles that are included in the volume, and leaves an impression that the editors themselves were struggling to find a justification. An important theme like the one the volume intended to deal with requires well founded theoretical perspectives that can hold different contributions together. It is interesting that neither the introduction nor the articles in the volume refer to the body of literature, both empirical and theoretical, and the contemporary debates that have been generated over the last decade or so. It is to be noted that most contemporary works actually trash the estimation of linear functions for understanding technology related issues.

Pradosh Nath is a Scientist at NISTADS, New Delhi and ICSSR Fellow at the Centre for Culture, Media and Governance, Jamia Millia Islamia, New Delhi.