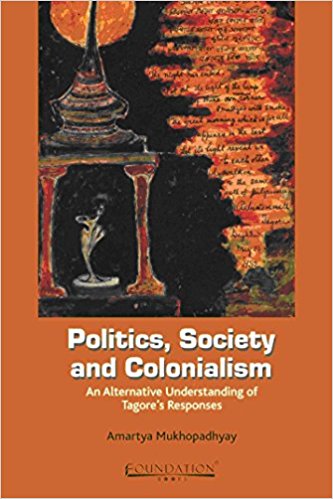 Rabindranath Tagore, who famously declared that he was ‘nothing but a poet’, is read in this book for anything but his poetry. ‘Much of Tagore’s central claim to greatness lies in his social thought’, the back cover of Amartya Mukhopadhyay’s comprehensive volume declares, and even a cursory inspection will show the reader the truth of those words in a wideranging spectrum of chapters that deal with every aspect of Indian ‘outer’ life—civil society, nation, Hindus and Muslims, gender, industry and even ecology—as they feature within the covers of this compendious book. The author is well versed in every conceivable academic branch of thought, from postmodernism to poststructuralism, postcolonialism to Marxism, nationalist thought to women’s studies, and brings his knowledge to bear upon the writings of Tagore in the light of the subject matter of the individual chapters. As a result, we have a very useful summary of current thinking on issues, say, of nationalism or civil society, that students will find helpful as a quick guide to the field.

‘From “Soksabha” to “Societalism”: Tagore’s Search for Civil Society in India and the Problems of Colonialism’ is the first chapter that deals with Tagore’s theories on society and the role of the civil social sphere in national life. Typically of the book, the chapter first explores thoroughly the evolution of the concept of civil society itself in its European contexts, summarizing the career of the concept from its roots in the ancient Greek tradition through John Locke, John Keane, and Charles Taylor down to Sunil Khilnani and Sudipta Kaviraj, to mention only a few names randomly. Once the field has been duly mapped with the thoroughness of a diligent student, Tagore’s own thoughts on the matter, as expressed mainly in his essays, but sometimes in his novels and plays, are explored in the light of recent commentators.