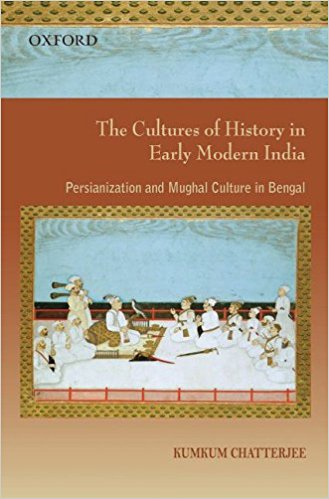 Kumkum Chatterje’s The Cultures of History in Early Modern India is an extremely important contribution on a range of themes which include historiography and historical traditions, the relationship between an imperial centre and (its) province, as well as, culture and power. It shows these registers to be concretely interconnected, through a detailed study of various genres of (historical/literary) writing in Sanskrit, Persian, Bengali and English, in Bengal, largely focusing on the 16th, 17th and 18th centuries. Chatterjee attempts to synthesize a conceptual claim about the nature of history writing, with a historical one about the ways in which a ‘provincial’ literary tradition (Bengal is the site) carries within it, elements of both Islamo-Persian and Sanskritic-Brahmanical traditions, formulating them in wholly original ways.

The second claim is related to the first; that is to say, such genres can be characterized as History because they reflect, as well as reflect upon, the political processes of Empire building, while at the same time carry a regional inflection. In a related vein, linguistic identity (Bengali) as expressed in a literary tradition ‘documents’ cultural crisscrossing (Persian and Sanskritic).

This intervention, original as it is, occurs in a context. The context lies in the recent, perhaps renewed and ever renewable, debate and discussion, on whether genres of writing in pre-modern India can be characterized as ‘History in a way that would be recognizable to us today. Ranajit Guha and Dipesh Chakrabarty have argued to the contrary via a critique of modern conceptions of history. On the other hand, recent scholarship, and here Textures of Time is exemplary, has argued that a close reading of the relevant material, from the Indic as well as Islamo-Persian traditions, reveal forms of historical consciousness, which might not be identical to modern positivist and rational versions of history, but which merit being construed as History, if one is willing to be open to history’s different meanings and uses, and not confine it to its modern disciplinary execution. Chatterjee’s work is clearly located here. Crucial to her thesis is the argument that History—as a mode of reflecting about the past—is present in pre-modern literary genres. Although there could very well be references to divine forces, anathema to the modern cannons of rationalist historiography and its protocols of evidence, these genres embed within themselves a commentary on their present, while at the same time giving an account of the past.