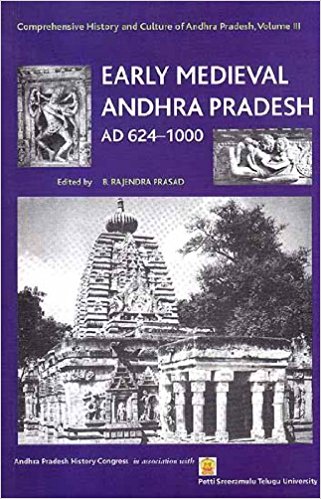 Andhra Pradesh History Congress has been doing commendable work in furthering the cause of historical research in that part of the country, taking the most recent advances in the discipline to the researchers and teachers there as well as publishing the rather ambitious series on the Comprehensive History and Culture of Andhra Pradesh, of which this is the third volume. It covers the period from AD 624 to 1000, when the early medieval phenomenon arrived in Andhra as well. The expression ‘early medieval’ is not used, significantly, just as a marker of chronology: the entire range of assumptions taken up by scholars in recent years in defining the processes and structures characterizing the ‘early medieval’ is followed by the editors and, to some extent the authors, in this volume. Thus V.Ramakrishna, the General Editor of the series, identifies the following features as characterizing the period in his Preface: ‘the peasantisation, pastoral extensions into society, growth in the Samantha hierarchy, the agrahara, the ghatika and the temple, as well as the growth of Pasupatha/Kalamukha mathas…’

It is commendable that this understanding is not confined to a pious remark in the Preface by the General Editor who has not contributed to the body of the book; it permeates through the Editor’s piece on ‘Transition’ as well as a few other chapters. It is too ambitious to expect the whole book, written by different scholars of varying levels of experience and achievement, to be informed by a single line of thinking and argument; what has been achieved is certainly more than what remains. The editors have done a commendable job indeed.