Symbols Of A Composite Culture 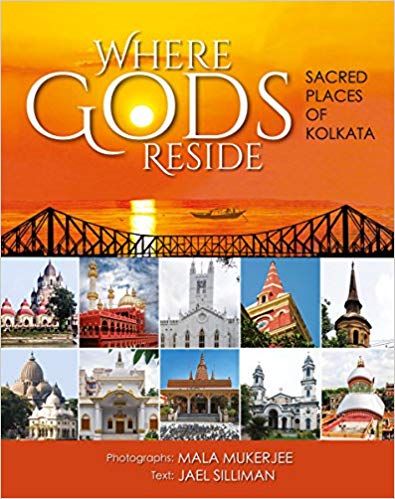 The city of Kolkata—and earlier Calcutta—has been the subject of a few visually rich books. Some readers may remember Desmond Doig’s amazing line drawings and tongue-in-cheek notes in Calcutta: An Artist’s Impression (1968), a rage when it came out, published by The Statesman for whom he worked. Essays in the two volumes of Sukanta Chaudhuri’s edited Calcutta: Living City (1990) are richly embellished with reproductions of paintings, lithographs and photographs, and White and Black (2009) with photographs by Christopher Talor and text by Soumitra Das is an interesting visual-cum-textual documentary on the city’s imperial past.

Where Gods Reside: Sacred Places of Kolkata  is different from earlier presentations as its rich, four-colour photographs and write-ups focus on a sample of the  myriad places of worship scattered over this vast metropolis. Jawhar Sircar’s absorbing introduction (a couple of textual references would have been very useful) provides a context to the area, its history and many belief systems. At times, however, for a non-Kolkata person, it could be a bit confusing to sort out what the author calls the ‘West bank’—the earlier European and British settlements—and the ‘East bank’ or the Greater Kolkata area. Sircar reminds us that though ‘Kalighat was the oldest religious site of any consequence’, there were two other Hindu shrines in Dharam-tala (dedicated to a folk god called Dharmaraj) and another at Chowringhee known as Chowringhee Baba. And, as by 1645, the Armenians had set up a commercial establishment in the Dutch colony of Chinsurah, they were clearly a presence when Job Charnock arrived in 1690. Thus, the first building of the Holy Armenian Church of Nazareth ‘was certainly the oldest Christian structure in these parts’ (p. 14). As Sircar rightly points out, in a country like India where ‘history and legend mix so easily’, it is no easy task to identify and locate places of worship. Nor is it always easy to get permission to photograph them.