A City As ‘Lived Experience’ 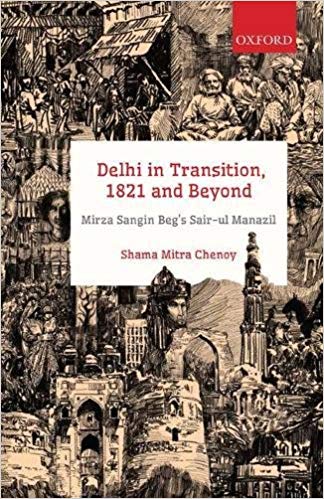 Delhi has exuded an aura of mysticism and merriment since ancient days. With time it grew to be the nucleus of some mammoth structures of power. As it became the hub of multifarious cultural strains its magic grew. Mirza Sangin Beg’s Sair-ul Manazil in tandem with its translation by Shama Mitra Chenoy makes that invisible emanation visible. Delhi in Transition presents the complex aspects of the vicissitudes of fortune of the city of Delhi in a paradoxically simple narrative. This work knowingly or unknowingly revolves around the idea that Delhi’s diversity represents the soul of Indian civilization. It aims at highlighting those chapters of Indian history that deal with the flowering of an unprecedented quest for understanding a city and its people in the context of the immediate and the unknown. It is the very first detailed and exhaustive translation of Mirza Sangin Beg’s Sair-ul Manazil.  Shama has compared the four known versions of the text; including the original manuscript located in Berlin. Sangin Beg was commissioned to write about the city of Delhi by William Fraser. The book was completed in 1821. If this historical gem of a narrative is a lighthouse that guides seekers of Delhi, then Shama’s work definitely adds to its brilliance.

In an astutely written introduction the author recreates a solid and multidimensional backdrop to the Sair-ul Manazil. She surveys the medieval and early medieval works, which inform readers about the Delhi of their times. A comparison of these narratives helps in gauging changes in the mind-set of authors and the resultant changes in selection and presentation of information. Thus biographies, autobiographies, panegyrics, hagiographies, travelogues, albums and poems are scrutinized. Situating Sair-ul Manazil is facilitated by a review of works of the same nature that preceded or followed it. Going beyond a matter-of-fact approach Shama discerns the circumstances under which these works were written. For example Sair-ul Manazil was written when two arrangements of governance and power co-existed in the city. While the Mughal power was comatose, the British power under the aegis of the East India Company was on the ascendant. From Sangin Beg’s personality to his book’s purpose, title, style, content and impact, Shama surveys it all. She writes: