Anatomy Of Bank Failures And Fallouts 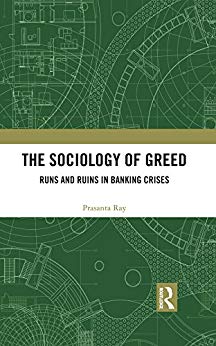 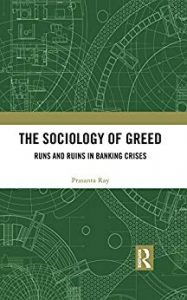 This is a very timely book. At one level, it offers discussions on banking related failures in Bengal Province during the 1940s and 1950s. A serious spate of bank failures had been experienced in the province in this period. It is oft stated that these failures left thousands of ordinary people, all of whom were politically invisible and mute, in financial ruin. The book represents an attempt to uncover and depict the anatomy of bank failures and its consequent fallouts. At another level, using the above depiction of how inadequate focus on institutional development facilitates mismanagement and fraud, it ruminates on the sociology of greed.

Prasanta Ray, the author, is Professor Emeritus in Sociology, Presidency University, Kolkata. His other books include Conflict and the State: An Exploration in the Behaviour of the Post Colonial State in India (1991) and Pratyaha: Everyday Lifeworlds: Dilemmas, Contestations and Negotiations (co-edited with Nandini Ghosh, 2016).

In the present book, Ray brings to light how tumultuous and tragic the decade of the 1940s was for Bengal. The province underwent violence and death of enormous magnitude. It experienced the Dhaka Riots of 1941, the Quit India movement of 1942, the Famine of 1943, the Tebhaga movement of 1946, the Calcutta Riots of 1946—the ‘Great Calcutta Killings’. and the 1947 Partition of Bengal. These constitute the backdrop within which a surge of bank failures had been experienced in the State. Ray cites RBI databases to reveal that 83 banks had failed in Bengal during 1947/51 representing over a third of the entire ‘all India failures’ in the same period. It is a slim book of 193 pages which includes 3 appendices.

The author’s research and central focus is centered around the people who were affected by the collapse of the banks, whose exact numbers are not known, the extent of their losses not recorded, and the impact on their lives not mentioned at all in official records and documents. This gap he has tried to fill with care within what he calls ‘the limits of data and the limits of conjecture’. The interested reader will find a very painstaking and deep analysis of income and saving potential of different classes of people to unveil the likely class identity of victims compiled by analysing a wide range of surveys and reports of NSS, State Statistical departments enquiry commissions, and so on. A sensitive attempt has also been made to depict the varied forms of hardship/loss that individuals experience when their life savings suddenly evaporate due to acts of natural calamity or fraud or theft. Ray has not only drawn on available archival material and newspaper reports, but also on the literature and theatre of the times to deftly construct the contours of the moral economy of Bengal, the dilemmas created by a variety of crises which impacted the province during the 40s and 50s but also to depict and map the complexities involved in analysing the social nature of greed fuelled as it is by the interplay of aspirations, ambitions, self-interest, institutional malfunction and herd behaviour from a variety of reference points.

In the process of this exercise, the book exposes an additional dimension for the meditative evaluation of the interested reader, though it was not the primary objective, that the victims of a banking failure are not only the ill fated depositors but also the employees and often the supervisors and managements of the banks. The impact of a bank failure on a hapless employee facing the ire of irate customers who have lost their money or the plight of the wife of an employee who has lost his bank job gets its due attention in the narrative. The book also depicts that while banking failures usually are occasioned because imbalanced managerial greed gets unsettled by external adversity, it can also at times get generated by well intentioned and yet ill advised efforts of some managements to assist victims of a natural calamity by ignoring self preservation. It recounts the agonies of a once popular ‘Das Bank’. It had 60 branches of which 20 were in East Bengal. The policy of that bank had throughout been that deposits from an area would be invested in the Industries and businesses of same area. The launch of direct action by the Muslim League in August 1946 created havoc with this arrangement. The majority of the clientele were Hindu. The sudden and yet extreme tumult created unnerved the businessmen/ industrialists of East Bengal who started looking for shelter and employment in West Bengal. ‘Observing their plight and in the hope that public life in the country would again become peaceful after the crisis would be over, Das Bank started giving them some money (against their own deposits) from the Calcutta office.’ In very little time, the depositors of East Bengal were able to extract 70% of their deposits from the Calcutta office but concurrently the money borrowed by the businesses and industries located in the Eastern area from the very same bank became irrecoverable due to the same political catastrophe since their owners had also fled. The bank was forced to seek court intervention to prevent closure. It should however be stated that the primary focus of the book is on the depiction (and critique) of the techniques and methodologies by which wealthy/greedy businessmen are able to convert and legitimize the conversion of public money into private wealth often in the full and yet impotent gaze of the people who are ruined. All in all, an interested reader, within the pace of a few short pages would get an all round understanding of the various complexities involved in a banking crisis.

The book has many merits but the mainstay is its last chapter entitled ‘Grasping Greed’ in which the author probes the meaning and origins of greed. This is what probably provoked Sabyasachi Bhattacharya to comment that it reminded him of the works of Adam Smith and Marx. The author explores the differing dimensions and implications of greed using the works of these giants as also a variety of other thought leaders, including those whose philosophies underlie the ‘Puritan work ethic’, as also those which influenced the attitudinal changes introduced by Deng Xiao ping (‘poverty is not socialism. To be rich is glorious’) to propel china to prosperity and global power  from the ravages of poverty and international isolation. The positive form of greed gets manifested when social/individual focus is directed towards attempts to increase or enhance ‘value added’. The negative variant of greed occurs when focus shifts or is mainly directed towards distribution/ appropriation /misappropriation of ‘value added’. Institutional arrangements and/or failure underlie which path is followed when. Thereafter, the dialogue moves on to identify, distinguish and situate the ‘grasping variant’ within the arena of underdeveloped capitalism.

While handling of the concepts is at one level masterly, yet from another focal point, it seems somewhat incomplete. The author had very correctly portrayed the colonial state as being somewhat nonchalant about the miseries and hardship occasioned by bank failures. Their priorities were transparently quite different from attempting ‘social welfare’. But the same cannot be so alleged against their ‘successors and assigns’—the newly independent Indian state. The next seven decades have witnessed the arrival of what can best be called an Economically Active State. The primary culprits of banking failures, the small private banks, have now all but gone. At Independence we had several hundred banks. Now the commercial banks can be counted in double digits and the majority business vests under state ownership. True, these few commercial banks are also accompanied by some cooperative sector banks and what are called ‘regional rural banks’ but these are mostly anemic and frail. However, this usually is not a matter for depositor concern as the state has since been ensuring that no depositor loses out on account of bank failure. Nor can it be said that the small numbers of commercial banks reduce customer access as the branches of the current banks can be found far more easily in every ‘nook and corner’ of the country than hospitals or schools or police stations or even playing fields.

The nature of the problem which requires discussion in this context is somewhat unusual. The colonial state was not only nonchalant about all matters economic but even indifferent about any interest except safeguarding its imperial entitlements. Yet Calcutta, and perhaps Bombay, Madras and Delhi, and their hinterland, despite all the horrors of Partition and famine, were then, relatively, by far the brightest and happiest of all cities this side of the Mediterranean all through the fifties and maybe beyond. However, post these 4/7 decades of living under an economically active state, this is no longer true. More prosperous and healthy and comfortably safe cities can now be found elsewhere in countries considered remote or backward or unsafe at the time of Indian Independence. While the query about why or whether Indian society has somehow fallen, or seems to have fallen behind in the race to uplift its citizens, though it was trying to run hard, is not strictly germane to the original point of enquiry of the author, it nonetheless comes up as a query since social attitudes (as against actual private practices) towards greed in post-Independent India may well have been the cause. However, only a multidisciplinary approach like that adopted by the author can assist in proving/disproving that the current social stresses in Indian society are because of misplaced views about greed.

TCA Ranganathan, an alumni of the Delhi School of Economics and a former CMD of Exim Bank, is currently a freelance writer.