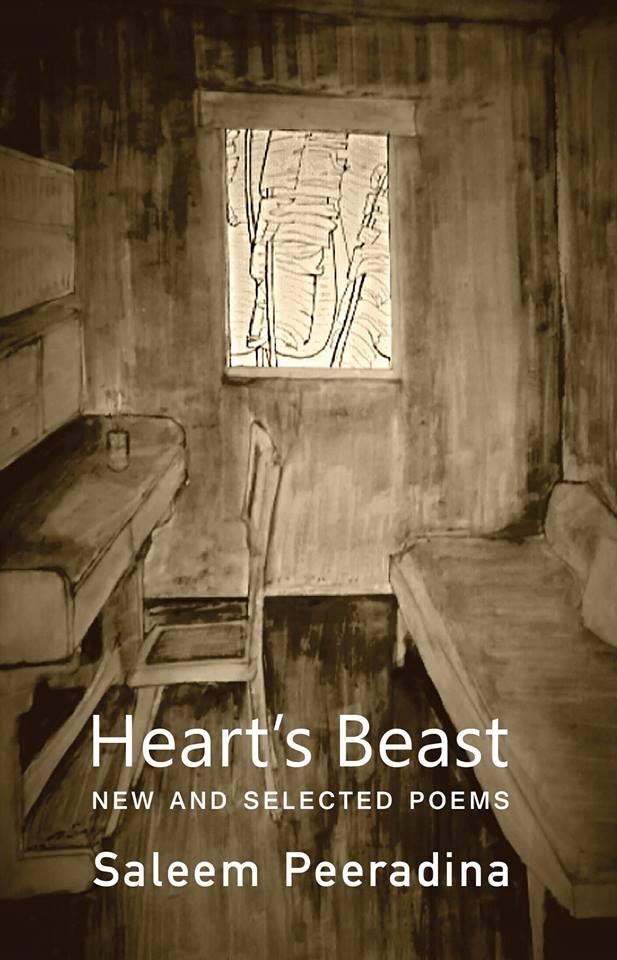 Not self-expression but expressiveness: The languageways of Heart’s Beast.

Apoet’s selected poems from multiple books and a lifetime’s work, implies an intense self-consciousness and a special focus on future readers. Selected poems are not really for one’s existing readership. Saleem Peeradina’s Dedication makes this plain: ‘To my readers, especially the generations that follow my own.’ Any established poet who selects from his published work, especially one as dedicated to craft as Peeradina, is making drastic survival judgments of published work. In choosing what he wants to survive in the future, we would seem to be focused on the poet’s most intense self-expression. Not so with Heart’s Beast.

What are the sources of poetic creativity? Poet and critic Geoffrey Hill answers: ‘I’m not interested in self-expression but in expressiveness.’ (Transcribed from Geoffrey Hill’s valedictory lecture as Oxford Professor of Poetry, 5 May, 2015; podcast available at http://www.english.ox.ac.uk/news-events/regular-events/professor-poetry).

If only the ‘self’ is expressed in a poem, what other self could fully be interested? The power of Heart’s Beast is its intense expressiveness freed from the routine contemporary obsession with self and its consciousness. No poetic selfies here.

Heart’s Beast opens with sixteen poems selected from First Offense (1980). These poems reveal ‘the short-lived taste of struggle’ (p. 14), whether within society in isolation or with relation to nature. When we remember that social struggles are best understood when acknowledged as already complicated by natural settings, we have poems like ‘The Real Thing’ which reminds us that we should ‘Consider intolerance/It is easy to learn’ and then the next poem provides the reminder that the ‘human form/small/against the sky’s altitude’ and ‘sounds/of insect life/constantly/creating/silence’ (p. 16) such natural realities are our real contexts and dynamic signs of reality. In the individual poem from which the book gets its overall title, we learn that ‘The heart must be curbed lest it become angelic’ and ‘It must surrender all/pride’ so that ‘the dew/of mortality will then bless its forehead.’ But the narrator is ‘Hounded/by his own lust, the heart/goes into hiding.’

In the ten poems selected from Group Portrait (1992), there is no separation of social worlds and ambient nature. In ‘Michigan Basement 1’ the poem opens with ‘a spare room/Surrounded by roots’ and the complex relationships of the creation of poetry in intersections of humanly created landscapes and natural ones ‘Re-align the earth’. Then in ‘Michigan Basement 2’ we learn the ‘magic of the ordinary world’. What is that magic? ‘Remaining whole is no longer the point:/ It’s staying divided, attaining equipoise.’

Meditations on Desire (2003) is represented with sixteen poems from that original book of more than sixty poems. Only a quarter of the verses have been preserved for future readers, and these poems in the center pages of Heart’s Beast are interpolations of ‘The archeology of waiting’ as a possible ‘deathbed conversion’ (p. 94). The foregrounded ‘waiting’ of these poems is for ‘the meeting/of mirrors’ (p. 79) but—‘every time I look/for you, what opens/before my mesmerized eyes/is a new puzzle’ (p. 89). Where does the ‘Desire’ of the original book and its central positioning in Heart’s Beast originate or lead? Here is the whole of poem 13:

The point about God

is not the existence

It is the longing,

The section of Heart’s Beast composed of nineteen poems from Slow Dance (2010) contains dynamic and expressive poems such as the ‘blinding light’ of the last stanza of ‘Testament’ and the light and dark of the opening stanza of ‘Slow Dance’. But for this reviewer, Slow Dance as a complete book of 38 poems, indeed Heart’s Beast overall, and more than this, poetry written in English anywhere in the poststructuralist current generation has no poem stronger, more compelling or prophetic than ‘Reflections on the Other’. If I had to choose one poem written in English since 1980 whose subject, approach, and dramatizing of the systemic racism that threatens this planet, it would be this poem. ‘Reflections on the Other’ provides the nuance yet clarity necessary for a racialization-conversation-confrontation across racial construction as an alternative to the race-war always just below the surface in Peeradina’s second homeland of the USA. (Note: the reviewer is an American). What makes this poem remarkable is the frankness and resilience of its questions: ‘If I am the other/what do you answer to?/Are you the designated one?’ This poem gets to the bottom of the racialization divide in the USA and the other homes of English as a staggering revelation of the power of poetry but also of its responsibilities once people are shown more reality than can be borne. What are we to do with the total reality of the last line of the poem, of two words which describe our predicament?

Race relations in the United States, and elsewhere, can best be seen as an ‘intimate estrangement’. People of colour and whites know each other more fully than we admit, through social media, entertainment, the news, sports rituals, at work, at school, at play, sometimes romantically. These relationships are permeated by debilitating stereotypes, exclusionary barriers, distrust, fear, and oppression, but also unmet desires for human wholeness and radical equality: ‘the hope/of being smitten by a familiar.’ When Peeradina writes that the ‘other is the truth continually denied’, he is reminding us that we are all almost infinitely complex, and that what we deny, exclude, occlude, insult and project onto racialized others are dimensions of self that we desire and/or fear or reject in ourselves. Yet in spite of the labour value of bodies of colour to the political-economy of white supremacy, ‘there is never final solution/ To the other.’ Given twentieth-century Holocaust history, ‘final solution’ reverberates in this poem with a genocidal reminder of the race war, mass internment and mass execution desires/imaginary of white supremacy in extremis.

Peeradina has unleashed great power with ‘Reflections on the Other’. What are readers and the poet to do with this power and responsibility? ‘Reflections on the Other’ might not be an astrophysics black hole but a poetic one that swallows the light of the other poems of Heart’s Beast into its overwhelming truth and power. Where does this poem fit into the expressiveness of Heart’s Beast? Is the racism brilliantly analysed at the heart of this poem not the Beast in this book’s title? The vividly presented racism that divides us so desperately empowers yet endangers this poem and this book. The major strength of Heart’s Beast is the clarity, poetry and overwhelming power of this poem. But ‘Reflections’ is also the major weakness of the book. A poetic revelation of this power and transformational potential, standing alone, makes the rest of the work less serious and less important. This possible dissonance of ‘Reflections’ with the rest of the book is where the final section of Heart’s Beast must be engaged.

In the ‘Author’s Note’ to the ten poems which end the book and which originate in Final Cut: New Poems (2016), Peeradina writes about his sources in the acts of reading and writing that led to the poems in Final Cut: ‘Learning about the spice trade, the histories of salt, pepper, tea, sugar, cotton, slave-trafficking, revealed the brutal and bloody politics of Imperial expansion.’ In the poems that follow, ‘A Conference of Crows’ shows not only close attention to the ways of crows but the pain of empathy in difference: ‘They live in close domestic proximity to us, but wary/Of human intentions, they will not befriend us.’ In the poem which ends Heart’s Beast, ‘The Curious Case of the Custard Apple’, we learn that the Sitaphal is but one example that ‘The British had a hand in rewriting the Anglicized/ Versions of not only fruits and vegetables, but also of larger entities/Such as cities, rivers, mountains, and streets.’

At the end of Peeradina’s selected poems we can compare the first page of Yeats collected poems in which he dramatizes world-creation through poetic wording:

The wandering earth herself may be

Only a sudden flaming word,

In clanging space a moment heard,

Robert Eddy has directed academic writing programmes at universities in China and Egypt, and at Historically Black Universities and Historically White Universities in the USA. His work focuses on the relationships of racism and rhetoric. He believes that the USA must be renamed to survive as a multi-racial democracy as it becomes a white-minority country in the next generation.