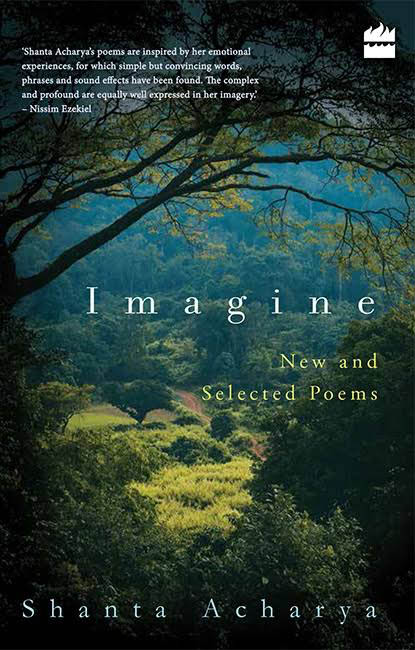 Shanta Acharya’s evolution as a poet shows three distinct phases, as William Blake has put it, of innocence, experience and higher innocence. She starts out in a restrained manner, goes through certain experiences, and then goes on to fully articulate her emotional experiences. She starts out with a reference to the Brihadaranyaka Upanishad—‘The Soul is not this, it is not that.’ Neti, Neti is a philosophy which states that the soul is always evolving. She seeks solace in Indian philosophy while living in the diaspora. And she peoples her poems with allusions to art, to literature, to history and to nature, philosophy, mythology, contemporary events, travel and also personal pain and longing. Her diction is literary and academic, but she chooses words carefully. There are two important strains in her poetry—the first, a love of nature and the second a quest for peace beyond the triviality of the here and now.In the last section, there is calmness and a sense of peace in the midst of nature.

In the innocence section, she says:

You will fail to find

Both my parents said

When I flew from their nest

To explore my brave, new world.

Many poems deal with life in Cuttack like ‘Ganesh Puja’, ‘Dussehra in Cuttack’ and ‘The Night of Shiva’.

Magic formula for the alchemy

Of sins into nirvana,

which is an epiphany.

Acharya refers to art in the section ‘From Looking In, Looking Out’; to Anish Kapoors’s ‘Creations’ at the Hayward Gallery, London, 1998; to George Grosz’s ‘Fruhlingsangfang’; to ‘Aztecs at the Royal Academy of Arts, London 2003.’ ‘Arranged Marriage’ and ‘Honeymoon’ deal with the pain of the breakup of a marriage. The breaking of the raft into two in ‘Honeymoon’ is symbolic of the rupture in the marriage.

The title poem, ‘Imagine’ is a tribute to nature:

John Lennon too in his song ‘Imagine’ says:

it’s easy if you can,

No hell below us

Above us only sky…

A brotherhood of man.

In the experience section, she talks about 9/11, the cyclone in Orissa, a poem on the tenth anniversary of the massacre in Srebrenica called ‘11 July, 2005’. In ‘What Might Have Been’ (for Keki in memory of Khurshid), he says:

In ‘Nirbhaya’ she says:

My sorrow speaks in myriad voices, will not be silenced

Till the sacrilege of rape and violence is
atoned.

Finally, in higher innocence, she seeks solace in Hindu philosophy.’ In Memoriam’ is in memory of her father, Brundaban Acharya. She quotes Hindu philosophy about the body changing form at death like a man casts off his clothes.

Like the soul grief never dies, only changes form—a head shorn of its resplendent crown of hair,

An actor in fancy dress…

Death and birth adorn the journey of the soul.

Acharya quotes from Emily Dickinson in the introduction to the section , ‘From Shringara’ which is dedicated to her father and grand-parents where the thawing of snow is a metaphor for grief:

This is the hour of lead,

As freezing persons recollect the snow—

First chill, then stupor, then the letting go.

In ‘On First Reading the Bhagavad Gita’, she says about her grandfather that he gifted her the Song of God, urging her to explore the universe and find the temple within. Being in a foreign country, she finds solace in the teachings. In ‘Ashoka’, she remembers the legendary king, who renounced violence and adopted ahimsa as a state policy. With this, her experiences come full circle, and she can find peace.

Shanta Acharya, a brilliant academic, a successful professional is also a very talented and prolific poet (five volumes of verses spanning over two decades). She was born and educated in Cuttack, Odisha, won a scholarship to Oxford, where she was among the first batch of women admitted to Worcester College in 1979. A recipient of the Violet Vaughan Morgan Fellowship, she was awarded the Doctor of Philosophy for her work on Ralph Waldo Emerson. She was a visiting scholar in the Department of
English and American Literature and
Languages at Harvard University before joining Morgan Stanley in London. The author of ten books, her publications range from poetry, literary criticism and fiction to
finance.

The present collection of poems Imagine is a moving collection of poetry that deals with issues of the self and of the ways in which identity is perceived, belonging and exile and the poet’s inner development and growth as a person with deep roots in two cultures.

Rachna Joshi works as Senior Assistant Editor at the India International Centre in New Delhi, and is the author of three collections of poetry. She has a Master’s degree in Creative Writing from Syracuse University in New York.