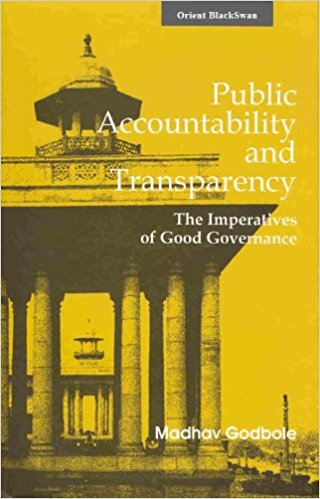 Madhav Godbole’s book, Public Account ability and Transparency: The Imperatives of Good Governance is one of the outstanding additions to the literature on governance and the contemporary political, administrative social scenario in the country, including the largely untouched areas of judiciary, media and corporate governance. It presents a well-documented analysis of the current milieu and gives a balanced and a critical appraisal of what is happening in the country. He has touched upon all agencies involved in the functioning of the state, including the Parliament, the judiciary, media and the executive and the other well-recognized non-state actors i.e. the private sector, the cooperatives and the civil society. Godbole’s criticism is both balanced and constructive. He not only identifies the problem areas but also gives his own solutions to those issues. For example, starting from his first chapter ‘We, the People’, after making a well-documented analysis on working of Parliamentary committees, Parliamentary privileges and listing specific failures of Parliament which have “contributed to the erosion of the confidence of the people in its capacity to deliver”, he goes on to give a framework of Parliamentary reforms.

This includes a code of conduct for MPs and MLAs including declaration of assets by the elected representatives. He is fairly critical of the Local Area Development Scheme, the complimentary railway passes to former MPs and discretionary quotas for MPs. Political scientists would do well to deliberate on the remedies he has prescribed in this chapter to cleanse Indian democracy of some of its unnecessary trappings of bygone days.

In his chapter on the ‘Unfinished Agenda’, Godbole has put electoral reforms under the microscope. Electroal funding has led to domination of money and muscle power leading to ‘captive politics’ and a large number of other evils. Criminals are now called ‘political activists’. In his inimitable style he has also drawn attention to the weaknesses of the Election Commission of India and criticized the infructuous expenditure incurred by it on certain schemes. The role played by opinion and exit polls has been also criticized and the author has demanded that a mechanism should be set in place to conduct a rating of such agencies.

As far as decentralization of governance is concerned, he has strongly supported the recommendations of the National Commission set up for the review of the working of the Constitution. He supports the idea of the creation of a separate ‘fiscal domain’ for Panchayats and Municipalities and for setting up state panchayat Councils. He rightly believes that for a country like India, decentralizing governance alone can deliver results. However, the author must realize that the biggest obstruction towards decentralization are the elected representatives themselves, at the state and the national level, as it is they who feel threatened by the delegation of powers which would take away powers they have been exercising so far.

In his chapter ‘Reinventing Government’, Godbole has discussed the concept of right to information and has criticized the state and central governments for not sharing secret information even with the judicial commissions appointed by them. He feels that agencies like RAW are being increasingly used by the ruling parties for their own purposes. The author has not spared even the Intelligence Bureau and has come down heavily on their conduct in the past. The author’s suggestion of having a sunset provision in all schemes and programmes as well as in all laws should be accepted by the law- and policy-makers.

The chapter on ‘Some Major Concerns’ looks at downsizing governments, and discusses political reforms and human rights. His remark that “Communalization of the police is yet another factor causing concern” should be taken up seriously by those who are running the Home Ministries in the states as well as in the centre. He maintains a balanced approach in his analysis of the working of the police. While on the one hand he is a strong protagonist for giving autonomy to the police in the discharge of their responsibilities he has also pinpointed their failures and their insensitive approach.

In his multifaceted approach to governance, Godbole next touches upon the financial sector. He strongly believes that our budgets should be more transparent and user friendly. His ideas on budgetary reforms while appearing to be in the nature of a school text, highlight specific areas of financial reforms like risk analysis, credit rating of PSU’s etc. which should be taken note of by the finance ministers both at the centre and the states.

In a very innovative suggestion, the author has suggested a new role for the Comptroller and Auditor General and setting up of a new National Audit Office as well as a Public Accounts Commission. The idea is bold in its approach as the essence of setting up of the National Audit Office is auditing “value for money”. Quoting the case of UK, where such a Commission has been set up, he makes a fine distinction between audit based on legality, regularity and propriety laid down under section 13 of the CAG Act in India and CAG’s role in UK where the CAG’s responsibility is to carry out an evaluation into the efficiency and effectiveness with which a department, authority or any other body had used its resources in discharging its functions. It is truly time the statutory auditing of the CAG is taken out of the straitjacket of finding faults with procedures and moving on to see how expenditure can be so scrutinized as to emphasize the aspects of economy, efficiency and effectiveness. In a developing economy like India with liberalization as the driving force, the government executive has to act in a very dynamic situation. Bureaucracy can no longer confine itself merely to following rules and regulations laid down in the past. Time is of the essence and achievement of objectives is of primary importance. Perhaps, if this new concept is adopted, governments would show more initiative and government executives would not feel hampered in their working.

In the next chapter on ‘Corporate and Cooperative Governance’ the author has delved deep into corporate governance. He has made a vast study of the literature in the US, UK, and other European countries and analysed reports of various committees including the task force of the Confederation of Indian Industry, Committee of the Securities and Exchange Board of India (SEBI) as well as the latest Naresh Chandra Committee on Corporate audit and Governance. The author has emphasized the need for credible and strong regulatory mechanisms and is in favour of strengthening SEBI. He has also highlighted the excessive indulgence shown to industrial organizations belonging to the apex Chambers of Commerce and Industry leading them to exercise veto powers in major economic and financial legislation. He has appropriately called them the “Third Chamber of Parliament” while agreeing that greater activism by shareholders and stakeholders alone would bring about better corporate governance, he feels the punishment by the market is the most effective instrument for disciplining a company. The author has rightly emphasized that public accountability and transparency are as important for the corporate sector as for any other sector of the economy. By saying so, the author has really brought into the forefront the fact that corporates including multinational companies are now exercising undue influence on the lives of millions and sometimes even more influence than the traditional structures of government.

It is in the last chapter of his book that the author has come out in his full brilliance. His well-documented analysis of the judiciary and its working and the misgivings that have been created in the minds of the public about the functioning of the courts in general should be read by all the Chief Justices and Judges of the Supreme Court and High Courts. The obiter dicta remarks of judges according to the author should be curtailed by guidelines by right-thinking members of the judiciary itself. Judicial restraint has been overtaken by the need to get publicity. Emphasizing the 15 point code of ethics adopted by the judiciary, the author says it is a good beginning but more needs to be done. The author has come down heavily on the Contempt of Court Act because Contempt has nowhere been defined and contempt of court is what “the court says”. Similarly, the author has analysed the role of the media but at the same time brought out their weaknesses also. He has also drawn attention to the cases of corruption amongst journalists and the decreasing credibility of the press. The abuse by the management of the newspapers for personal gains has also been highlighted.

In the end, the author has come to the conclusion that there is no substitute for the involvement of the common person and civil society in governance and in the endeavours to achieve the objectives of governance. Civil society cannot keep itself away from what is happening in the judiciary, the media, the Parliament and the executive. In fact, one truly feels that unless civil society acts, and acts fast, these pillars of democracy, set up by our founding fathers, will gradually erode.

The book is comprehensive in its approach, constructive in its criticism, and educative for the general reader. In the end, however, one feels that, as citizens, we cannot escape the blame for the mess. While on the one hand we are developing economically and creating a niche for ourselves in the international arena, the constitutional structures within the country are getting eroded. Obviously even though God is in his heaven, all is not right with India. After reading this book, the “feel good” factor seems to fade away leaving the reader with a nagging question—Quo Vadis? (Wither goest thou).

Yogendra Narain, a member of the Indian Administrative Service, is currently Secretary-General of the Rajya Sabha.