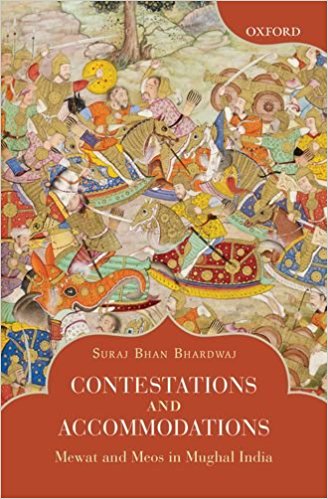 Centestations and Accommodations is a discussion on the social, economic and political history of the Mewat region of north India spanning the period thirteenth to the early eighteenth centuries. It is a story of the Meo tribe, their social transformation, peasantization and Islamici-zation. Generally known for their criminal and predatory activities like cattle lifting and plundering in the Mewat region, the Meos, the book argues, switched to plough-based, sedentary agriculture and even emerged as the landed class of the region, established their zamindaris throughout the region, acquired gotra (caste) identities and prominence as a community. They were further socialized, says the author, as the Mughal Emperors’ personal bodyguards and palace guards popularly referred to as khidmatiyyas; and as dak meoras they dominated the postal and espionage system of the Mughal state. The region, as it emerges from the text was of immense strategic importance for both the Sultans of Delhi and the Mughal Emperors.

The author proposes this volume as an alternative understanding to Shail Mayaram’s hypothesis in Against History, Against State: Counter Perspectives from the Margins (2004). Mayaram represents the Meos as self-governing communities, socially organized on the basis of their lineages (pals) that opposed the state monopoly whether of the Mughals or the Rajputs, upheld the significance of the decentralization of power, vested powers in their pal chaudharis and generally retained their characteristic features over a long period of time, demonstrating virtually no change in the pattern. Bhardwaj contests the arguments of Mayaram on the Meos and finds her observations comparable to those of British East India Company. Arguing that the village communities during the Mughal period were neither ‘independent’ nor ‘autonomous’, the author suggests that the Meos witnessed socio-economic, cultural changes as they shifted towards peasantization and adopted agrarian arrangements. Moreover, the author asserts that with the absorption of Mewat in the Delhi Sultanate and the Mughal Empire, the powers of the pals and the pal chaudharis diminished particularly with regard to land revenue collection and the settlement of local disputes; the amil (revenue official) instead, assumed the role of an intermediary and interacted with the peasants.