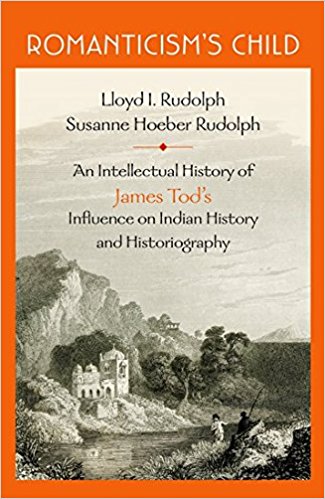 Colone James Tod was unique in being one of the intellectual fathers of both, a benevolent Orientalism, and a romantic, militarized, Indian nationalism, especially the variety clothed in Rajput valour and pride that continues to inspire people across caste, religion and region. Since the 1980s, appraisal of James Tod’s role as a historical actor who contributed to the making of modern India has been undertaken in varying degrees by Ronald Inden, Norbert Peabody, Jason Freitag, Ramya Sreenivasan and Cynthia Talbot. Romanticism’s Child is an addition to this stream of writing in exploring aspects of Tod’s intellectual motivation and purpose. While Inden and Peabody were more interested in exploring orientalism; Talbot and Sreenivasan in Prithviraj Chauhan and Padmavati; only Freitag and the Rudolphs focused on Tod as the primary subject of their investigations.

Romanticism’s Child comes in breezy and easy prose unlike jargon-laden and tiring reads that form the bulk of academic output. The short book is divided into two parts. The first consists of five chapters, and the shorter second part consists of two appendices showcasing documents and epistolary selections that buttress some of their arguments. The chapters vary in length and subject matter.