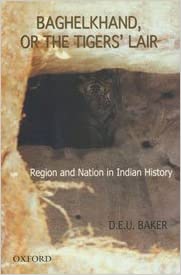 David Baker has been at home at St. Stephen’s College, Delhi, as a teacher and scholar for nearly forty years and is presently engaged in writing a history of that institution. Baker’s work has drawn attention to central-regional dynamics in the emergence of the modern Indian state and society. His first book published in 1978 examined changing patterns of leadership in the Central Provinces and Berar during the emergence of mass nationalism before 1939. A subsequent monograph dealt with a century of colonial rule in the same region. Somewhat unusually among scholars of Indian regionalism and nationalism, Baker has been sensitive to the positions of tribal people in history and the roles of tribal societies in constituting regional identities. In the book presently under review, Baker examines aspects of ‘the nationalizing process to a point where it led to the [Baghelkhand] region’s incorporation in the Indian nation in the twentieth century’ (p. 1). He acknowledges that using regionality ‘when examining, say, prehistoric and early historic events and people is to impose an artificial geographical boundary on influences that knew no such boundaries’ (p. 2).

These influences include patterns of human migration, utilization of land and other resources, and socio-cultural processes such as the spread of Buddhism and Sanskritization, not to mention the piecemeal ‘integration’ of tribal societies into a dominant, supposedly monolithic ‘Hindu’ civilizational pattern.